Toyota (TM) Teams Up With Hino & Isuzu for Truck Technology

Per the terms of the deal, Toyota will acquire 39 million shares of truckmaker Isuzu’s common stock worth 42.8 billion yen. This will result in Toyota acquiring a 4.6% stake inIsuzu. Also, Isuzu is expected to acquire Toyota shares of the same value through a market purchase.

Additionally, the three Japanese companies are jointly setting up a new entity called Commercial Japan Partnership Technologies Corporation in Tokyo, to promote their partnership, and plan for technology and services.

Benefits of the Partnership

The three companies plan to integrate Toyota’s CASE technologies with Isuzu and Hino's strength in commercial vehicle business, with the aim to expedite the implementation of CASE technologies, as well as achieve a carbon-neutral society by providing green transportation solutions.

Amid the heightening climate-change concerns, the Japanese government has pledged to achieve carbon neutrality by 2050. Thus, the significance of electrifying both passenger and commercial vehicles in a way that responds to this pledge has become all the more important. Moreover, the latest partnership among the three companies will help advance this goal in the commercial vehicle sector in Japan.

The alliance has been formed to focus on the development of battery electric vehicles (BEVs) and fuel cell electric vehicles (FCEVs), autonomous driving technologies, and electronic platforms for small commercial trucks, enabling them to reduce costs, promote ecological infrastructure and enhance traffic safety.

The deal has been designed to reduce emissions by building hydrogen infrastructure, and make the commercial vehicle sector more efficient. Further, the companies plan to link their connected technology platforms to build a platform for providing various logistics solutions aimed at boosting the efficiency of commercial vehicles.

Apart from this, having efficient logistics networks through connected trucks would help reduce the burden on truck drivers and solve Japan’s shortage of drivers.

Toyota had invested in Isuzu in 2006 for developing diesel engines but the two companies broke capital ties in 2018. This partnership revives the relationship between the two companies, with Toyota trying to step up its autonomous driving and electric vehicle (EV) game plan.

The collaboration of Toyota’s breakthrough CASE technologies with Hino and Isuzu’s truck experience is a wining deal for customers as it offers them commercially-viable, extended range, zero-emission vehicles.

This partnership is a game changer for the companies as it in sync with their goal of providing durable commercial vehicles equipped with cutting-edge technology to customers.

Notably, shares of Toyota have declined 2.6% year to date compared with its industry’s fall of 3.1%. 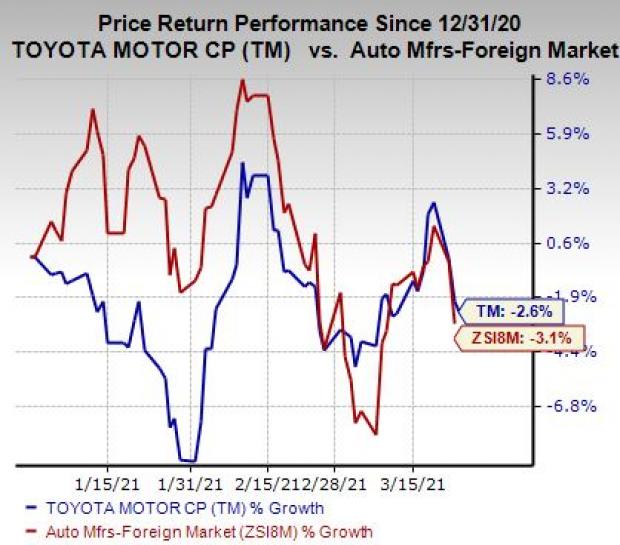