The U.S. telecom stocks witnessed a relatively flat trajectory on an average over the past week as a tense undercurrent continued to plague the industry owing to the fresh restrictions imposed by the Biden administration on China-based telecommunications equipment manufacturers. The communist nation strongly protested against the unilateral decisions, further straining the diplomatic relations between the countries. Moreover, although President Biden has vouched to maintain better relations with Beijing, lack of tangible effort to roll back the earlier sanctions levied by his predecessor has created a sense of uncertainty within the industry as it remained circumspect of the government’s future course of action.

Notably, the administration amended some licenses for companies that supply raw materials to Huawei, jeopardizing certain existing contracts already in force. The amended terms make it rather impossible for the companies to supply items that can be used with 5G devices, even if the said items have nothing to do with 5G functioning. Simultaneously, the FCC has placed Huawei along with four other China-based telecom firms — ZTE, Hytera Communications, Hangzhou Hikvision Digital Technology and Dahua Technology — on the blacklist, deeming them threats to the national security. This, in turn, is likely to prohibit domestic firms from using their communications equipment or services. The FCC has also set the ball rolling to revoke the authorization of China Unicom Americas, Pacific Networks and its wholly owned subsidiary ComNet to provide U.S. telecommunications services.

Meanwhile, as the political slugfest for 5G supremacy continued at the backdrop, cyber espionage attempts to steal sensitive information related to 5G technology have increased in recent times. However, the Biden administration is not yet planning to set up government surveillance of the U.S. Internet as it remains mindful of the privacy and civil liberties implications that could arise. Instead the government plans to focus on strict partnerships and improved information-sharing with the private-sector companies that already have broad visibility into the domestic Internet to thwart cyber-theft and data intrusion efforts.

1.     Ericsson (ERIC - Free Report) has unveiled a trailblazing network programmability tool — 5G Core Policy Studio — that aims to modernize network services while aiding communications service providers (CSPs) with centralized management of end-to-end 5G core network policies. Network policies are a set of guidelines that regulate the behavior of users, devices and applications in the network. It is also helpful in making policy decisions on a real-time basis.

At a time when providing differentiated services in a dynamic telecommunications industry has become a challenge amid rapid technological shifts, this software solution comes as a boon to enable CSPs to configure advanced services for businesses and consumers within network slices. Markedly, these services are specifically designed to cater to the personalized needs of different end users.

CommScope has introduced C-Band antennas that enable operators to replace the existing multi-band antenna with one that boasts C-Band functionality without any change in size, thus eliminating the requirement for any costly structural changes or increase in leasing fees. The company has also launched CBRS antennas that support sub-6 GHz bands. Leveraging twin-beam technology that effectively doubles cell site capacity and enables six-sector deployment, these antennas facilitate carriers to increase network performance while decreasing total cost of ownership.

3.     Nokia Corporation (NOK - Free Report) has inked a deal with Antina Pte. Ltd. — a joint venture between mobile network operators M1 and StarHub — to launch 5G Standalone Radio Access Network in Singapore. In addition to offering support for new consumer and enterprise use cases for seamless deployment of 5G services, the partnership aims to promote digital economy in the South East Asian nation.

Notably, Nokia was selected through a competitive tender process for the project. Utilizing the 3.5GHz spectrum band, the company will offer telecommunications equipment from its AirScale and CloudRAN portfolio to deploy 5G services in the region.

Markedly, the modernization initiative is primarily aimed at enhancing Aqua Comms’ submarine network capacity while meeting the peak traffic and digital connectivity requirements between the United States and Europe.

5.     Reinforcing its efforts to establish a streamlined connectivity infrastructure, Bell, which is wholly owned by BCE Inc. (BCE - Free Report) , recently announced that it is set to bolster the deployment process of high-speed Internet across Quebec. The company is widely known for providing superior fiber optic technology to several business and residential customers with state-of-the-art broadband TV and Home Phone services.

Bell is considered the frontrunner in delivering high-speed Internet to rural communities in Quebec, along with its increasing fiber and Wireless Home Internet (WHI) networks. Impressively, the company had augmented its WHI service rollout in rural communities that included 137,000 additional homes by the end of April 2020, responding to the COVID-19 situation. 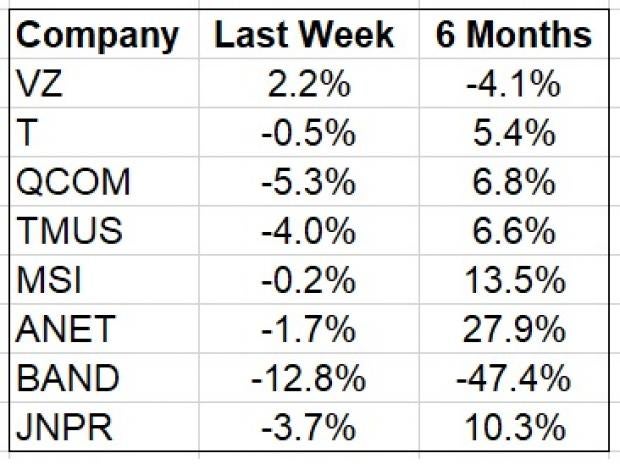 Over the past six months, Arista has been the best performer with its stock appreciating 27.9%, while Bandwidth has lost the maximum at 47.4%.

Over the past six months, the Zacks Telecommunications Services industry has jumped 1.6% on average, while the S&P 500 has gained 16.8%. 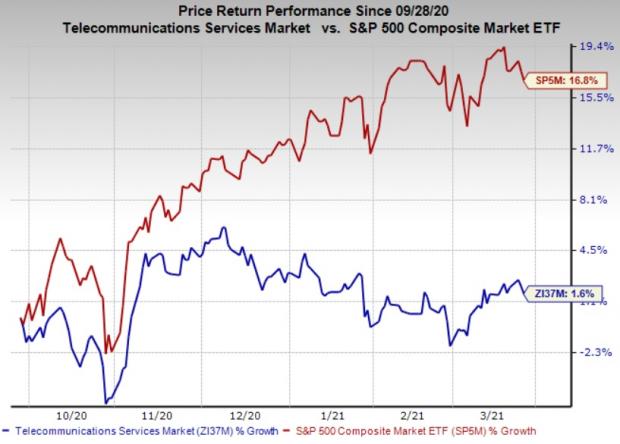 In addition to 5G deployments and product launches, all eyes will stay on how the Biden administration safeguards the telecom sector against probable external threats.