In a concerted move to increase its liquidity, TELUS Corporation (TU - Free Report) has announced a secondary offering of 51.3 million shares at C$25.35 each. The company will also grant a syndicate of underwriters an option to purchase an additional 7.7 million shares to cover any over-allotments. The company expects to generate gross proceeds of about C$1.5 billion from the transaction (if the over-allotment option is exercised in full), bulk of which is intended to be utilized for capital investments related to 5G infrastructure upgrade.

In particular, the company aims to use the proceeds to accelerate the build-out of TELUS PureFibre infrastructure in Alberta, British Columbia and Eastern Quebec and fast track the process of national 5G network rollout. TELUS expects to earmark about C$500-C$750 from the transaction for capital investments in 2021 and the remainder for 2022. These funds are over and above its planned annual capital expenditures of C$2.75 billion for 2021 and 2022, providing it with the requisite wherewithal to surpass the competition in the domestic market.

Leveraging the infrastructure investments, TELUS anticipates reaching up to 225,000 additional rural and urban premises with its fiber technology, while enhancing the speed and coverage of its wireless network. This, in turn, is likely to result in the addition of incremental customers and improve its operational efficiencies by advancing its copper decommissioning plans. In addition, it is likely to augment the cash flow from 2023 onward due to reduction of capital expenditures by at least C$250 million owing to accelerated investments in 2021 and 2022.

In the next two years, the company aims to offer direct fiber access to 93% of Greater Quebec City and Eastern Quebec residents. The company plans to generate subscriber growth in key growth segments, including wireless, high-speed Internet and TELUS TV. Increasing demand for reliable access and fast-data services are expected to support customer addition. Furthermore, TELUS International and TELUS Health are likely to contribute to the company’s organic and inorganic growth as exemplified by the Lionbridge AI buyout. 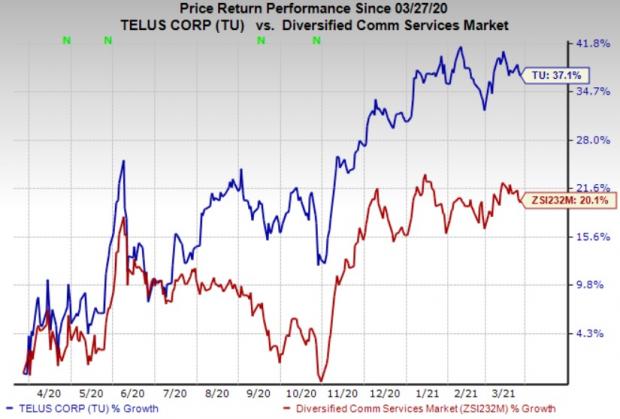 Knowles has a long-term earnings growth expectation of 10%. It delivered a positive earnings surprise of 19.3%, on average, in the trailing four quarters.

Corning has a long-term earnings growth expectation of 2%. It delivered a positive earnings surprise of 41.6%, on average, in the trailing four quarters.