Novartis AG (NVS - Free Report) announced that the European Commission has approved its B-cell therapy Kesimpta (ofatumumab) for the treatment of relapsing forms of multiple sclerosis (“RMS”) in adult patients with active disease defined by clinical or imaging features.

In January 2021, the Committee for Medicinal Products for Human Use (CHMP) of the European Medicines Agency (EMA) adopted a positive opinion and recommended granting marketing authorization of Kesimpta for the given indication.

The approval in Europe was based on data from two phase III ASCLEPIOS studies which met the primary endpoints. Results from the same showed that treatment with Kesimpta demonstrated superiority over Sanofi’s (SNY - Free Report) Aubagio (teriflunomide) in significantly reducing annual relapses by more than 50% as a first-line treatment in MS.

Per the company, Kesimpta is the first B-cell therapy, which can be self-administered once a month at home via the Sensoready autoinjector pen. It can become a first-choice treatment option for patients with RMS. Notably, in Europe, over one million people are living with MS. Hence the approval for Kesimpta gives another treatment option for people living with RMS in the continent.

Shares of Novartis have declined 7.5% so far this year against the industry’s increase of 0.1%. 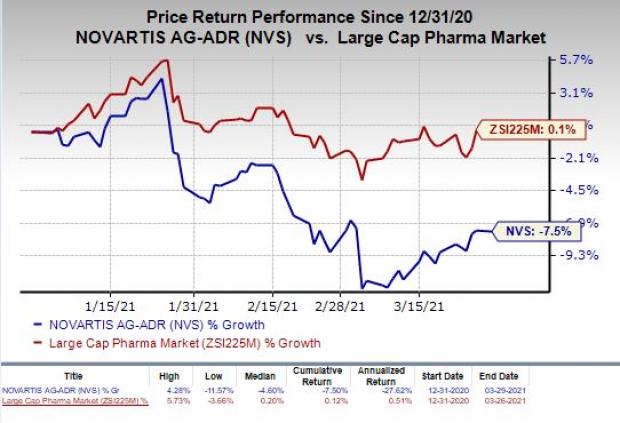 Last August, the FDA approved Kesimpta as a subcutaneous injection for the treatment of adult patients with RMS including a clinically isolated syndrome, relapsing-remitting disease and an active secondary progressive disease.

In 2020, Kesimpta generated sales of $15 million. The approval in Europe should boost the drug’s sales in 2021.

Notably, in December 2015, Novartis in-licensed rights to ofatumumab from GlaxoSmithKline (GSK - Free Report) for all indications including RMS.

We remind investors that that multiple sclerosis is a crowded market with many companies jostling for space with drugs in their portfolio already approved for the same indication. Biogen (BIIB - Free Report) holds a strong position with a wide range of products in the given market space.

In a separate press release, Novartis announced that it has acquired worldwide rights to develop/commercialize therapeutic applications for a library of Fibroblast Activation Protein targeting agents including FAPI-46 and FAPI-74 through an assignment agreement with iTheranostics, Inc.

With this deal, Novartis is looking to expand its oncology radioligand pipeline.