Bonanza Creek Energy (BCEI - Free Report)  announced the closing date of its previously-announced merger deal with HighPoint Resources Corporation, which is expected to be on Apr 1, 2021.

Notably, the closing of the merger is subject to the conditions of HighPoint’s pre-packaged debt-restructuring plan and the merger deal, which involve $625 million in unsecured debt in exchange for shares in the combined company.

Last November, HighPoint and Bonanza Creek reached an agreement of consolidation in a $376-million deal. The agreement involved merging of the two companies in the Denver-Julesburg (“DJ”) Basin to form a new entity as well as combine their property and production.

Most recently, HighPoint filed for Chapter 11 bankruptcy protection, with the intent that a speedy recovery from financial difficulties will help seal the previously-announced merger deal with Bonanza. During its bankruptcy, HighPoint owned assets worth $826.63 million against $760.43 million in debt.

Notably, both companies will have an interest in the DJ Basin acreage, with a daily production capacity of 50,000 barrels of oil, liquids and natural gas equivalents per day. The combined company will be able to generate a free cash flow of nearly $340 million through 2023 to pay off debt and return to shareholders through dividends or share repurchases.

Also, the transaction will initiate a premier DJ Basin player with a peer-leading expenditure pattern and a sizable rural footprint. The merger is expected to yield significant synergies and a major scale in the rural DJ Basin, which will increase free cash flow.

Headquartered in Denver, Bonanza is an independent energy company engaged in the acquisition, exploration and development of onshore oil and natural gas properties in the United States.

Shares of the company have underperformed the industry in the past six months. It stock has gained 88.6% compared with the industry’s 121.4% growth. 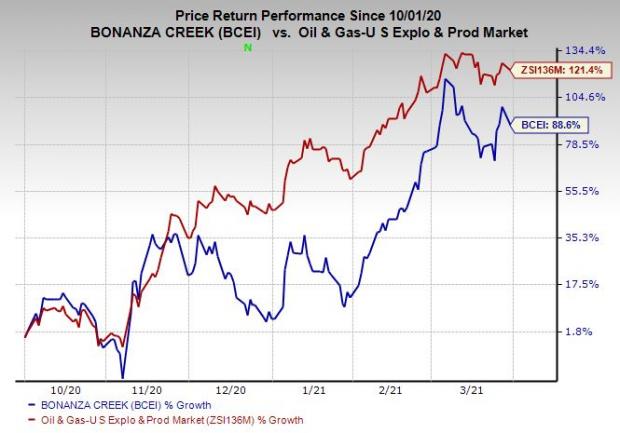 The company currently has a Zack Rank #4 (Sell).

Whiting Petroleum’s earnings for 2021 are expected to surge 214% year over year.