Adjusted earnings per share of $2.72 missed the Zacks Consensus Estimate by a slight margin but increased 6.7% on a year-over-year basis, driven by improvement in operating results.

FactSet’s revenues of $391.8 million also missed the Zacks Consensus Estimate marginally but increased 6% year over year. The uptick was driven by higher sales of analytics, content and technology solutions.

Notably, FactSet’s shares have gained 21.8% over the past year, underperforming 27.8% rally of the industry it belongs to. 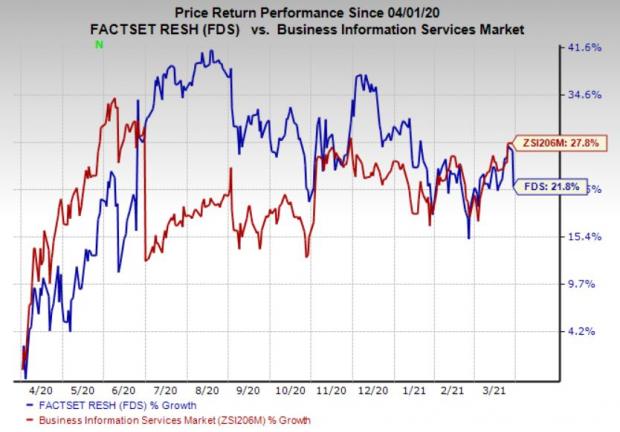 FactSet’s Annual Subscription Value (“ASV”) plus professional services was $1.6 billion, up 5.5% organically. Buy-side and sell-side ASV growth rates were 5.5% and 6.3%, respectively. Nearly 84% of organic ASV was generated by buy-side and the rest by sell-side firms performing functions like mergers and acquisitions-advisory work, equity research and capital-markets services.

ASV generated from the United States was $985.2 million, up 6.4% from the prior-year quarter’s levels. ASV from EMEA and Asia Pacific regions were $427.6 million and 159.8 million, up 4.8% and 9.4% year over year, respectively. FactSet added 164 clients in the reported quarter, primarily driven by an increase in corporate and wealth management clients, taking the total to 6,103. Annual client retention was 90%. At the end of the quarter, total employee count was 10,660, up 7.8% year over year.

FactSet exited the quarter with cash and cash equivalents of $602.7 million compared with $560.1 million in the previous quarter, and long-term debt of $574 million compared with $575.5 million at the end of the prior quarter. In the quarter, the company generated $140.7 million of cash from operating activities, while capital expenditures were $10.4 million. Free cash flow was $130.2 million.

The company continues to anticipate adjusted EPS in the range of $10.75-$11.15, lower than the current Zacks Consensus Estimate of $11.18.

The company expects revenues between $1.57 billion and $1.585 billion. The Zacks Consensus Estimate for revenues is pegged at $1.58 billion.

Organic ASV plus professional services for fiscal 2021 is projected to increase in the range of $70-$85 million over fiscal 2020.

Adjusted operating margin is projected in the range of 32%-33%. The annual effective tax rate is expected between 15% and 16.5%.

ABM Industries’ (ABM - Free Report) first-quarter fiscal 2021 adjusted earnings from continuing operations came in at $1.01 per share, beating the consensus mark by 65.6% and improving more than 100% year over year. Total revenues of $1.49 billion missed the consensus estimate by 0.5% and declined 7.5% from the year-ago quarter.

With super high data speed, it will make current cell phones obsolete and unlock the full potential of big data, cloud computing, and artificial intelligence. In the next few years this industry is predicted to create 22 million jobs and a stunning $12.3 trillion in revenue.

Today you have an historic chance to pursue almost unimaginable gains like Microsoft, Netflix, and Apple in their early phases. Zacks has released a Special Report that reveals our . . .