Rationale Behind the Divestment

In recent times, the company's O&M business has been witnessing stiff competition, and has also been exposed to broader disruptions arising from the coronavirus mayhem. According to a top official of the company, fall in power-purchase agreement prices for its utility-scale solar projects has been a major headwind, as it creates hindrances in scaling businesses and enhancing the range of O&M product and service offerings. Evidently, as First Solar's O&M business gross margins shrunk to the 10% range lately, from the 30% gross margins in 2017, it decided to divest the business to NovaSource as the ideal strategy at this time.

A Look at Some Major Divestments

How will the Divestment Impact First Solar?

First Solar's divestment of its O&M business is in line with the company’s objective of streamlining operations and focusing on the core business making thin-film solar modules, and serving its commercial and utility portfolios. The company has already started initial production of its Series 6 modules at the second factory in Malaysia in February, and anticipates the Malaysia factories to have a nameplate capacity of 3 GW. In 2021, it plans to invest around $425-$475 million for expanding its module wattage, as well as capacity and throughput at the company’s manufacturing facilities.

First Solar is also keen on improving the efficiency of its Series 6 modules from 440+ watts to 500 watts over the next four years, in a bid to compete against competitors manufacturing crystalline silicon modules, such as Jinko Solar (JKS - Free Report) and Maxeon SolarTechnologies. To this end, we expect the O&M business divestment to play a significant role in achieving such goals.

In the past six months, shares of this Zacks Rank #3 (Hold) company have rallied 29.9% compared with the industry’s 6.5% growth. 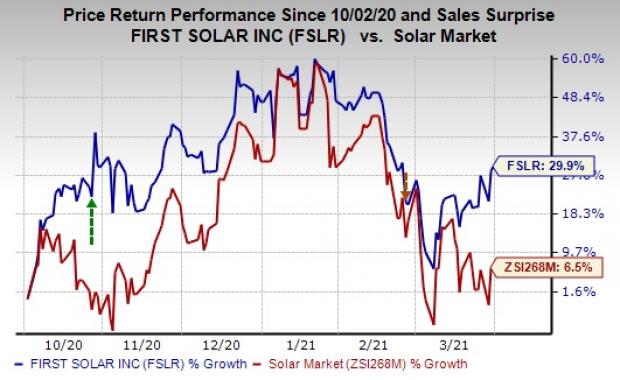