The U.S. telecom stocks witnessed a healthy uptrend over the past week driven by optimism surrounding the multi-billion infrastructure investment plan by President Biden to boost the post-pandemic economic revival. The proposed plan includes a $2 trillion investment map over eight years to augment transportation infrastructure such as bridges, roads, public transit, ports, airports and electric vehicle development along with sustained efforts for jobs creation and address climate change impacts. In addition, the plan includes a $100 billion provision to significantly expand broadband access to Americans as the administration aims to fortify its technological prowess and negate the dominance of countries like China.

The plan envisions reaching the underserved areas of the country and prioritizing support for broadband networks affiliated with local governments, nonprofit organizations and cooperatives to encourage strong competition with privately-owned companies. This, in turn, is likely to be beneficial for consumers in the long run through lowering of prices and offering price transparency by service providers. The plan has also earmarked funds for the tribal areas that lack access to high-speed Internet. Furthermore, the U.S. President has allotted $180 billion for R&D and future technologies that are likely to sow the seeds for technology innovation to leapfrog the competition against China and South Korea. The infusion of funds and federal support likely provided a sense of security to the industry and fueled its growth momentum over the past week.

Meanwhile, Federal Communications Commissioner Brendan Carr has urged the government to bar the use of China-based Huawei and ZTE’s equipment in the domestic network even if it was not deployed using federal funds. He also sought the agency’s help to formulate stringent equipment authorization rules for companies that procure raw materials from Xinjiang as part of their supply chain mechanism to ensure that no issues of forced labor were involved in it. Notably, Huawei is already reeling under tough U.S. sanctions and its revenue has nosedived due to dearth of supply of critical components. This, in turn, has even forced the communist nation to announce tax breaks and spur the development of its semiconductor industry in a concerted effort to be self-reliant.

Regarding company-specific news, collaborations, strategic investments and federal funding primarily took the center stage over the past five trading days.

1.     In a major relief, the U.S. Federal Trade Commission ("FTC") has decided not to pursue the review of the antitrust ruling against Qualcomm Incorporated (QCOM - Free Report) in the Supreme Court. With this, the four-year litigation process by the FTC against the chipmaker comes to an end.

The favorable turn of events has been a shot in the arm for Qualcomm, which is facing a tough time meeting the high demand for chips widely used in smartphones and electronic gadgets. With Android phone users shunning Huawei models owing to U.S. sanctions, demand for Qualcomm chips has increased manifold. The chip manufacturer is reportedly finding it difficult to cater to this surging demand due to a shortage of certain subcomponents within its chips.

2.     T-Mobile US, Inc. (TMUS - Free Report) has announced plans to expand its collaboration with Google across a broad range of customer experiences. The wireless carrier intends to step up its investment in the ecosystem to give customers an enhanced experience, with products and services offered by Android, Pixel and YouTube. The multi-year collaboration is part of a larger initiative by T-Mobile and Deutsche Telekom to create a better messaging experience for customers.

This initiative includes making Messages by Google the default messaging solution for T-Mobile customers with Android smartphones, and promoting Pixel and Android devices on T-Mobile’s 5G network. It also comprises harnessing Google One as the phone backup and cloud storage solution, and supporting YouTube TV as T-Mobile’s premium TV solution.

3.     Viasat, Inc.’s (VSAT - Free Report) subsidiary, Viasat UK Ltd., has set up a Network Operations Center (“NOC”) and Cyber Security Operations Center (“CSOC”) in Aldershot, the U.K. The state-of-the-art facility will support defense, government and commercial organizations that depend on the resilience of their networks for daily operations.

The NOC and CSOC are the beginning of Viasat’s substantial investment in the U.K. prosperity agenda. These include the target of creating more than 75 highly-skilled jobs and investments of more than £300 million to support the launch of the ViaSat-3 constellation over Europe, the Middle East and Africa.

4.     Corning Incorporated (GLW - Free Report) recently secured additional government funds to augment the domestic manufacturing capacity of glass vials for vaccines. In addition to corporate social responsibilities for contributing to the overall cause of vaccination and treatment of COVID-19 patients, the federal funds for the Life Sciences segment are likely to help the company strengthen its position as a leading packaging provider in the healthcare sector.

Corning will receive $57 million from the Biomedical Advanced Research and Development Authority, which forms part of the Office of the Assistant Secretary for Preparedness and Response at the U.S. Department of Health and Human Services. The investment will facilitate Corning to scale up its manufacturing capabilities at three U.S. facilities — Big Flats, NY; Durham, NC; and Vineland, NJ — to bridge the demand-supply gap for glass containers as pharma companies accelerate vaccine production.

5.     Ciena Corporation (CIEN - Free Report) has collaborated with a telecommunications service provider — Colt Technology Services — to successfully conclude a trial of transporting 600G wavelengths for a seamless network infrastructure. The test was made possible with Ciena’s WaveLogic 5 Extreme technology.

Markedly, the landmark trial entitles Colt to be the sole provider with the potential to transport 600G connectivity via a long-haul live network in Japan. Of late, service providers are transitioning toward a more adaptive network that harnesses state-of-the-art technological innovation for high-bandwidth services while catering to dynamic customer preferences with simplified operations, especially in stressful times of the COVID-19 pandemic. Hence, the latest move is expected to be highly advantageous for Colt. 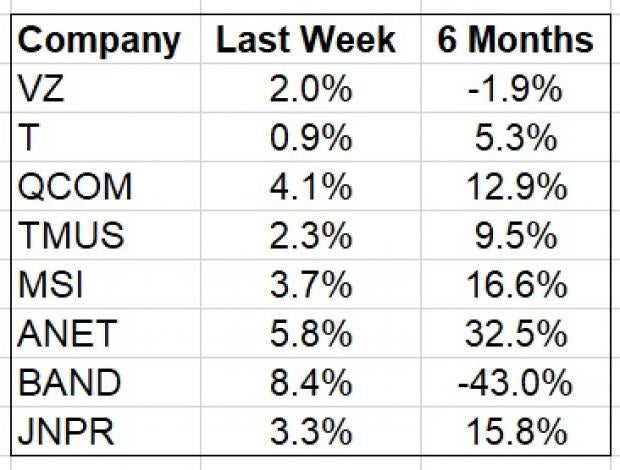 In the past five trading days, Bandwidth has been the best performer with its stock gaining 8.4%, while none of the stocks declined.

Over the past six months, Arista has been the best performer with its stock appreciating 32.5%, while Bandwidth has lost the maximum at 43%.

Over the past six months, the Zacks Telecommunications Services industry has jumped 4.7% on average, while the S&P 500 has gained 19.6%. 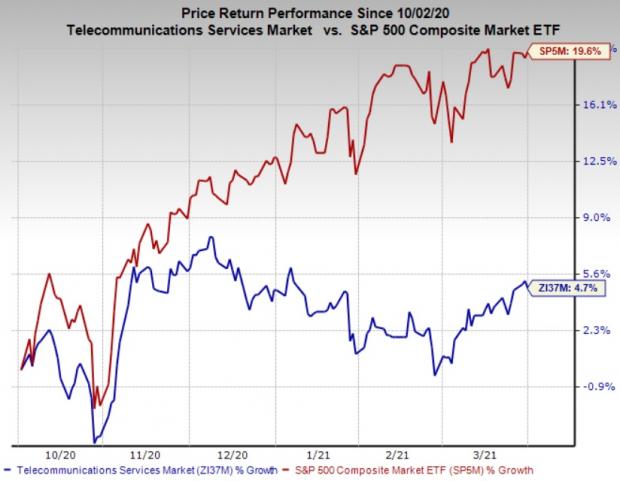 In addition to 5G deployments and product launches, all eyes will remain glued on how the infrastructure investments benefit the telecom sector and help propel its growth momentum.