Pioneer Natural Resources Company (PXD - Free Report) recently announced that it has agreed to acquire a Permian rival for $6.4 billion. The acquiree is a privately-held Fort Worth, TX-based upstream company, DoublePoint Energy. The latest acquisition agreement follows the $4.5-billion all-stock buyout of Parsley Energy, which concluded in January.

Acquiring the Midland Basin neighbor will make Pioneer Natural one of the biggest producers in the Permian Basin, the most prolific oil resource in the United States. As a result of the bolt-on acquisition, 97,000 high-quality net contiguous acres will be added to Pioneer Natural’s existing asset base. The deal will boost the acquirer’s total holding in the basin to more than 1 million net acres.

The company expects output from the acquired acres to rise to 100,000 barrels of oil equivalent per day by the June quarter-end. Earlier, with the Parsley Energy acquisition, Pioneer Natural bolstered daily output capacity to 558 thousand barrels oil equivalent. Moreover, the DoublePoint buyout is expected to result in $175 million of annual cost savings. Reduction in general and administrative and interest expenses, along with rising operational efficiencies will likely help the combined company to achieve the goal of cost curtailments.

The deal will likely cost Pioneer Natural 27.2 million in common stock and $1 billion of cash. Moreover, it will assume DoublePoint’s $900 million debt. The acquirer is expected to use a portion of its cash on hand and revolving credit facility for the transaction.

Now, the question remains whether Pioneer Natural’s balance sheet can support the acquisition. At the end of fourth-quarter 2020, cash balance totaled $1,442 million. Long-term debt summed $3,160 million, reflecting a debt to capitalization of only 22.2%. It also has a $1.5 billion credit facility. Importantly, the upstream energy player’s debt to capitalization has been persistently lower than the industry over the past few years, reflecting considerably lower debt exposure that can support the buyout.

The transaction is expected to close in the second quarter. If the deal materializes, it will be added to a long list of mergers and acquisitions, which have been triggered by the ongoing pandemic situation. The market downturn allowed the acquirers to buy assets at beaten-down prices. Southwestern Energy Company’s (SWN - Free Report) possession of Montage Resources, ConocoPhillips’ (COP - Free Report) Concho Resources acquisition and Devon Energy Corporation’s (DVN - Free Report) buyout of WPX Energy are some of the latest purchases witnessed in U.S. shale plays.

Its shares have gained 87%, underperforming the industry’s 123.3% rally in the past six months. The company currently carries a Zacks Rank #3 (Hold). 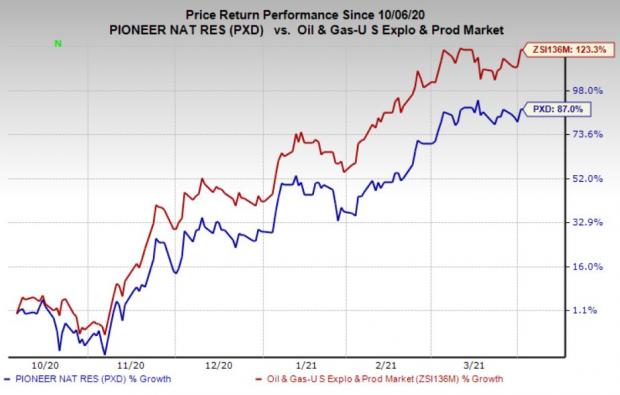