First Solar, Inc. (FSLR - Free Report) has recently completed the sale of its utility-scale solar project platform of nearly 10 gigawatts (GW)AC to Leeward Renewable Energy, LLC. More than 50 members of the First Solar project development team have joined Leeward as a part of this project sale.

As the transaction has now concluded, Leeward will acquire First Solar's project development platform, which includes 773 megawatts (MW)AC of projects that are expected to commence construction in the next two years, as well as the 30-MWAC Barilla Solar Project, which is already operational. The pipeline further includes projects in the California, Southwest and Southeast markets.

Rapid monetization of projects has been significantly favoring solar players, thereby boosting their operational results. First Solar currently caters to a geographically-diverse customer base spread across key markets in the United States, Germany, France, Portugal, India, Japan, among others. Given its strong global presence, the strategy of project monetization tends to boost this solar player’s profits.

Similarly, toward the end of March, ReneSola completed the sale of two ground-mounted solar parks to Alternus Energy Group for approximately $28 million, with a generating capacity of 15.4 megawatts (MW) in Romania.

First Solar is witnessing a strong growth for its modules, as it continues to expand manufacturing capacity for its Series 6 modules, given growing worldwide demand for solar modules. The company has started initial production of its Series 6 modules at the second factory in Malaysia in February 2021 and anticipates its Malaysia factories to have a nameplate capacity of 3 GW. In 2021 itself, it plans to invest around $425-$475 million for expanding its module wattage as well as capacity and throughput at its manufacturing facilities.

First Solar also eyes on improving the efficiency of its Series 6 modules from 440+ watts to 500 watts over the next four years, to compete against competitors manufacturing crystalline silicon modules such as Jinko Solar (JKS - Free Report) and Maxeon Solar Technologies.

In the past six months, shares of this Zacks Rank #3 (Hold) company have increased 5.6% against the industry’s 3.6% decline. You can see the complete list of today’s Zacks #1 Rank (Strong Buy) stocks here. 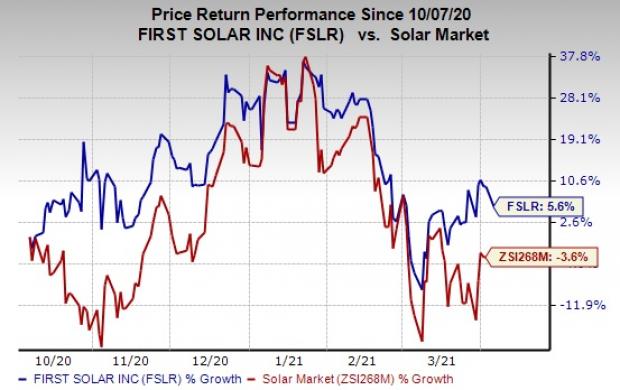