BP plc (BP - Free Report) is expected to have reached the $35-billion net debt goal in first-quarter 2021, as announced by the company. Following the announcement, the stock jumped 3.5% as its debt burden has been a concern for investors for a long time. Reaching the debt reduction target early will boost its financial flexibility.

The company had a net debt of $38.9 billion at fourth quarter-end. In the earnings call during that period, management highlighted its target of reaching $35 billion net debt by fourth-quarter 2021 or first quarter of the next year. A strong first-quarter performance supported by trading activities and earlier-than-expected proceeds received from disposals have enabled the company to reach the goal well ahead of schedule.

In the March quarter, the company received about $4.7 billion in proceeds from disposal, which includes stake sale in Oman’s Block 61, global petrochemical divestment to INEOS and others. As a result, the British energy giant is now expecting 2021 disposal proceeds to be at the upper limit of the $4???$6 billion guided range. BP is reportedly selling stakes in six offshore Brazil exploration and production blocks to state-run Petróleo Brasileiro S.A. or Petrobras (PBR - Free Report) , which can boost the disposal. It expects to generate a total of $25 billion from asset sale by 2025, of which it has already received $10 billion.

Furthermore, reaching the net debt goal is expected to trigger share repurchase activities. It plans to return 60% of its cash flow surplus to shareholders through repurchases, which will boost shareholder value in the coming days. The oil price plunge and energy demand destruction in 2020 resulted in dividend cuts, and pauses and discontinuation of buyback programs by several energy companies. BP is expected to provide further details on the repurchase program during first-quarter results announcement on Apr 27.

BP’s shares have gained 22.3% in the year-to-date period compared with 20.6% growth for the industry. 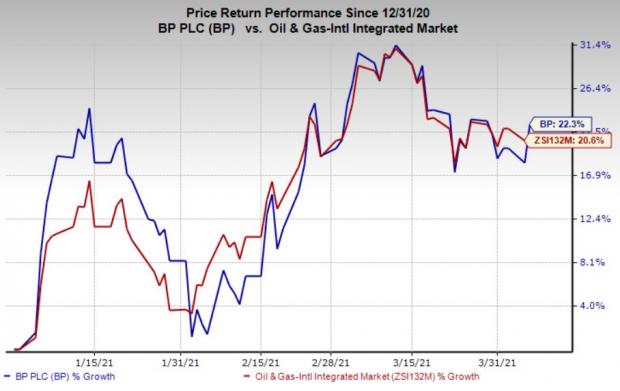 The company currently has a Zacks Rank #3 (Hold). Some better-ranked players in the energy space include Covanta Holding Corporation (CVA - Free Report) and Equinor ASA (EQNR - Free Report) , each having a Zacks Rank #2 (Buy). You can see the complete list of today’s Zacks #1 Rank (Strong Buy) stocks here.