In the past week, management at the Latin American carrier Gol Linhas Aéreas Inteligentes (GOL - Free Report) stated that the airline operated only 245 domestic flights per day (on average) in March compared with 355 and 489 flights a day, on average, in the respective months of February and January. This sharp decline was due to Brazil being hit by the second wave of coronavirus cases. Ryanair Holdings’ (RYAAY - Free Report) March traffic report was also dismal due to a fresh spike in COVID-19 gripping many countries in Europe.

However, in the United States, air-travel demand is northbound as more and more Americans get vaccinated with each passing day. Anticipating this demand to surge further in the upcoming summer season, Southwest Airlines (LUV - Free Report) recalled some of its pilots from the coronavirus-induced voluntary leave. Meanwhile, Spirit Airlines (SAVE - Free Report) announced an expansion update in response to the air-travel demand uptick in the United States.

Notably, United Airlines (UAL - Free Report) also recently announced its plan to bolster its domestic network in a bid to meet the expected recovery in air-travel demand during summer. This was mentioned in detail in the previous week’s writeup.

1. At Gol Linhas, traffic, measured in revenue passenger kilometers, plunged 47.7% year over year in March. In the same month, capacity measured in available seat kilometers contracted 47.8%. Since traffic decline was marginally less than capacity contraction, load factor (% of seats filled by passengers) inched up 0.2 percentage points on a year-over-year basis to 71.8%. Gol Linhas’ total monthly departures slumped 52% while seats tanked 50.7%. Due to the recent spike in COVID-19 cases, demand in the domestic market declined 32% during March from the February levels. Moreover, supply contracted 23% in the same month on a month-over-month basis due to the reduction in demand for tickets coupled with increased cancellations and no-shows.

2. Ryanair’s March traffic tanked 91% year over year to merely 0.5 million guests. On a rolling-annual basis, total traffic at Ryanair dived 81% to 27.5 million. The carrier’s load factor in the month was 77% compared with 91% a year ago.

3. Per a Reuters report, Southwest Airlines, currently carrying a Zacks Rank #3 (Hold), recalled 209 pilots from a voluntary extended leave program as it prepares to meet the anticipated increase in travel demand during the summer season. Per the report, the pilots’ status will become active Jun 1 onward. Prior to their resumption of duty, they will complete the necessary requalification training requirements. Other airline heavyweights like Delta Air Lines (DAL - Free Report) also called back pilots, rendered inactive by the pandemic as the report suggests.

5. Alaska Air Group’s (ALK - Free Report) subsidiary Alaska Airlines joined the oneworld alliance as its 14th full member. The airline had received a formal invitation to join the global alliance in July 2020. As part of oneworld, Alaska Airlines will be able to strengthen its global network to cover as many as 1,000 destinations across more than 170 countries and territories. With this membership, the carrier will add seven airline partners and enhance its existing partnerships with six oneworld members. 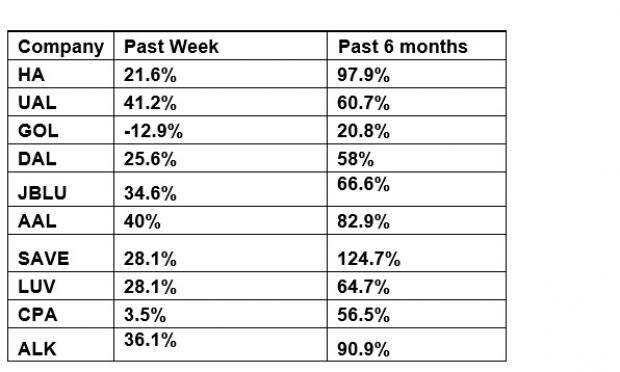 The table above shows that all airline stocks, barring Gol Linhas, which is suffering disappointing air-travel demand following the second wave of the coronavirus pandemic in Brazil, have traded in the green over the past week. Evidently, the NYSE ARCA Airline Index has gained 2.4% over the past week to $110.40. Over the course of the past six months, the sector tracker has surged 93.2%.