Yum China Holdings, Inc. (YUMC - Free Report) is poised to benefit from unit expansion, remodelling efforts, digitization and menu innovation initiatives. However, rise in expenses as well as the pandemic-induced dismal traffic is a concern.

Let us delve into the factors highlighting why investors should hold on to the stock for the time being.

Yum China is focused on relentless unit growth of restaurants to drive incremental sales. During fourth-quarter 2020, the company initiated the testing of small town model for its KFC stores with the backdrop of localized menu, store layouts and operating models requiring less capex. Given the positive feedback, the company plans to open more small town model stores in the KFC segment, going forward.

Meanwhile, more than 80% of the company's current portfolio has been remodeled or built in the past five years. On Apr 8, 2020, the company acquired a controlling stake in Huang Ji Huang that has more than 640 restaurants, almost all of which are franchise-based. It roughly possesses five restaurants per million people in China, which is expected to grow to 15 stores per million. There is ample potential to expand the restaurant base to triple its current size, given the continued rise of the middle-class discretionary spending. Going forward, the company plans to open approximately 1,000 new stores in 2021.

Also, Yum China is capitalizing on the benefits of technology. The company is increasingly shifting toward digital and content marketing to expand its customer base. It has adopted a high-grade delivery strategy that includes collaborating with aggregators to source traffic and fulfills orders by the company’s KFC riders. In 2020, the company upgraded its rider platform with AI enabled zoning, rider routing optimization and real-time monitoring. Also, the company tested rider sharing between KFC and Pizza Hut in Eastern China. With expansion on cards, the initiative is likely to help the company drive volume and leverage the extensive network to control quality.

Another riveting growth potential of Yum China resides in its continual menu innovation to boost the top line. During the fourth quarter, the company introduced KFC's Wagyu Beef Burger and Sweet Pumpkin Congee. It also launched Portuguese Chicken Curry at Pizza Hut. Notably, the items resonated well with consumers. Yum China is also serving coffee across its restaurants and expanding the dessert category. The company will increase investment to expand presence in the Coffee segment, as it believes that the beverage has a strong demand in China. 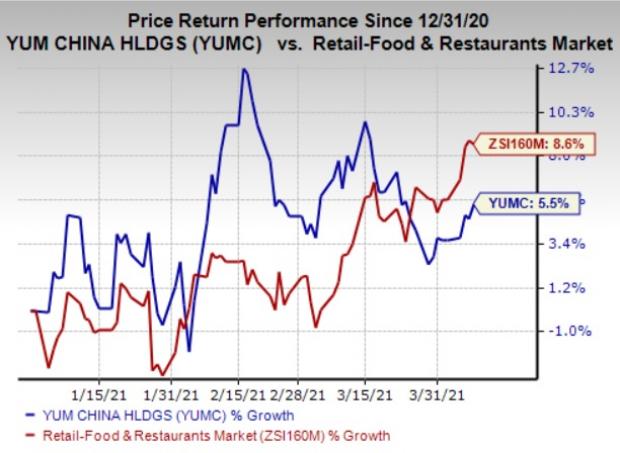 Shares of Yum China have gained 5.5% so far this year compared with the Industry’s 8.6% growth. The dismal performance was primarily caused by the coronavirus pandemic. Although situation in China is under control and the company has opened its restaurants, traffic is still below pre-outbreak levels. The pace of recovery is uneven as people continue to avoid going out and practice social distancing.

Moreover, the company is bearing additional costs stemming from promotion, menu innovation and technological novelty. In order to curb labor cost, the company is increasingly focusing on delivery channels, which is again expected to curb margins in the near term. Also, costs related to transactions and franchises are expected to gear up in the near future.

In the fourth quarter, total costs and expenses expanded 7% year over year to $2,079 million compared with $1,935 million in the year-ago quarter. The deterioration was primarily caused by 8% increase in food and paper costs along with 6% increase in occupancy and other operating costs.

Jack in the Box has three-five-year earnings per share growth rate of 17%.

Chuy's Holdings has a trailing four-quarter earnings surprise of 126.5%, on average.