President Joe Biden unveiled half-a-dozen executive actions on Apr 8, aimed at curbing gun violence that has recently taken a nasty turn in the United States. Referring to the latest mass shootings in Texas and South Carolina and many more before that as “an epidemic and international embarrassment”, Biden announced stringent gun control initiatives compared to what America has witnessed over the past few years.

The U.S. President also nominated gun-control advocate David Chipman to be director of the Bureau of Alcohol, Tobacco, Firearms and Explosives, which is the key agency enforcing America’s gun laws, with the hope to advance commonsense gun safety laws. Naturally, the spotlight is on gun stocks right now.

In his address from the White House, the U.S. President has committed to taking actions for reducing all forms of gun violence – community violence, mass shootings, domestic violence, and suicide by firearm. These actions include tighter rules on buyers of home-assembled “ghost guns” since these firearms lack a serial number and thus cannot be traced by law enforcement. The Justice Department has been directed to issue a proposed rule within 30 days that will help in stopping the proliferation of these firearms.

The President has also urged the Congress to pass two bills that House passed last month, focusing on closure of loopholes in firearm background checks, in addition to advocating banning assault weapons and high-capacity magazines.

As expected, most of the gun-maker stocks reacted adversely on announcement of such gun control measures, with their share prices taking a dip. These include

Sturm, Ruger & Company, Inc. (RGR - Free Report) : This company is engaged in the design, manufacture and sale of firearms. It also manufactures and sells investment castings made from steel alloys and metal injection molding parts for internal use in the firearms segment. Its firearms include single-shot, auto-loading and bolt-action rifles; single and double-action revolvers; as well as rimfire autoloading and centerfire autoloading pistols.

In response to Biden’s gun control measures, the company’s shares slipped 0.8% in the last trading session.

Smith & Wesson Brands, Inc. SWBI: It designs, manufactures and sells firearms. The company is one of the largest manufacturers of handguns, modern sporting rifles, and handcuffs in the United States. Smith & Wesson manufactures a wide array of handguns (including revolvers and pistols), long guns (including modern sporting rifles, bolt action rifles, and muzzleloaders), handcuffs, suppressors, and other firearm-related products.

In response to Biden’s gun control measures, the company’s shares slipped 0.6% in the last trading session.

Olin Corporation OLN: Apart from being a global producer and distributor of chemical products, this company manufactures and sells small caliber military ammunition and components, and industrial cartridges. The United States Army has selected Olin’s Winchester unit to manufacture small caliber military ammunition, including 5.56mm, 7.62mm, and .50 caliber rounds, as well as certain cartridges and casings.

In response to Biden’s gun control measures, the company’s shares slipped 0.8% in the last trading session. 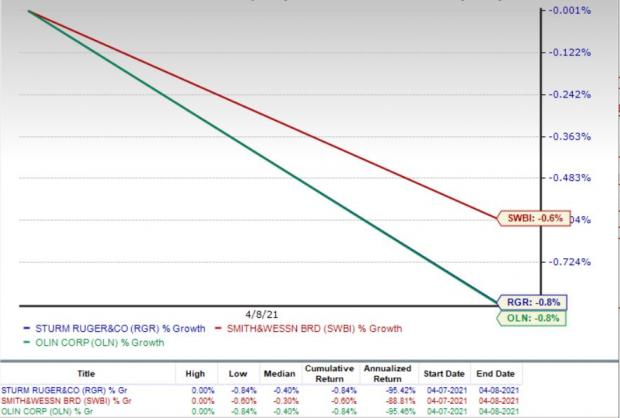