Syndax Pharmaceuticals, Inc. (SNDX - Free Report) announced that the FDA has granted an orphan drug designation to its anti-CSF-1R monoclonal antibody, axatilimab, for the treatment of patients with idiopathic pulmonary fibrosis (“IPF”), a serious and life-threatening lung disease.

Shares of Syndax were up 2.1% following the announcement of the news on Thursday. In fact, the stock has risen 2.5% so far this year against the industry’s decline of 6.5%. 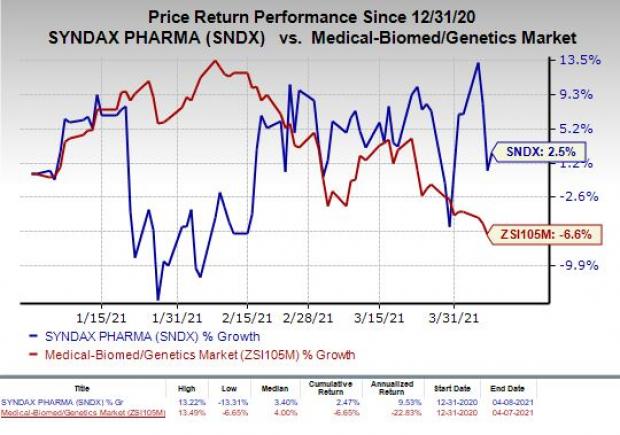 Notably, the orphan drug designation is granted to drugs that are capable of treating rare diseases that affect less than 200,000 people in the United States. This tag also makes the company entitled to certain other benefits, including tax credits related to clinical trial expenses, an exemption from the FDA user fee and seven-year marketing exclusivity upon potential approval.

Per the company, an estimated 150,000 patients could get affected by IPF in the United States. Hence, if successfully developed and upon potential approval, axatilimab could lend a big boost to Syndax’s growth prospects in the days ahead.

Meanwhile, axatilimab is also being developed for the treatment of patients with chronic graft versus host disease (cGVHD). Last month, the FDA granted an orphan drug designation to axatilimab for the given indication.

The phase II AGAVE-201 study is currently evaluating the safety and efficacy of three doses and schedules of axatilimab for treating patients with cGVHD. Top-line data from the same in expected in 2023.

The company believes axatilimab could become a meaningful therapeutic approach for cGVHD, as well as for other fibrotic diseases.

Please note that if successfully developed and upon potential approval, axatilimab is likely to face competition from Incyte’s (INCY - Free Report) JAK1/JAK2 inhibitor, Jakafi (ruxolitinib), which is approved for the treatment of steroid-refractory acute GVHD in adult and pediatric patients aged 12 years or older.