Equinor ASA (EQNR - Free Report) recently announced that it will develop two power stations in the Humber region of the United Kingdom in association with British utility SSE Thermal. Both the power stations will be first of a kind and focus on low carbon emissions. The move will boost the decarbonization process in one of the most carbon-intensive industrial clusters in Humber, U.K.

The project is expected to generate thousands of skilled jobs. The power stations will be fitted with the carbon capture and storage (CCS) technology, which will support U.K.’s target of accelerating the decarbonization process and aid in net-zero transition. The final investment decisions for the project are dependent on local policy frameworks. The new stations will likely replace carbon-intensive power generation on the grid.

The Keadby Hydrogen power station is expected to have a peak demand of 1,800 megawatt (MW) of hydrogen. Importantly, hydrogen is expected to replace and reduce the usage of hydrocarbons for power generation. During combustion, the station — a completely hydrogen-fired one — will produce no emissions. The company expects the station to start operations before 2030. It plans to supply low-carbon hydrogen at the site from the H2H Saltend project.

It will develop the Keadby 3 power station with the CCS technology, which will store carbon dioxide under the Southern North Sea. The station, which may start operations by 2027, will be powered by natural gas. Notably, it is expected to achieve 15% of the 10MT per annum carbon capture target by 2030.

Equinor’s partnership with SSE is expected to be further strengthened with this move. The companies have partnered on projects like Aldbrough Gas Storage facility and the massive Dogger Bank offshore wind farm.

Shares of the company have gained 45.3%, outperforming the industry’s 32.7% growth in the past year. 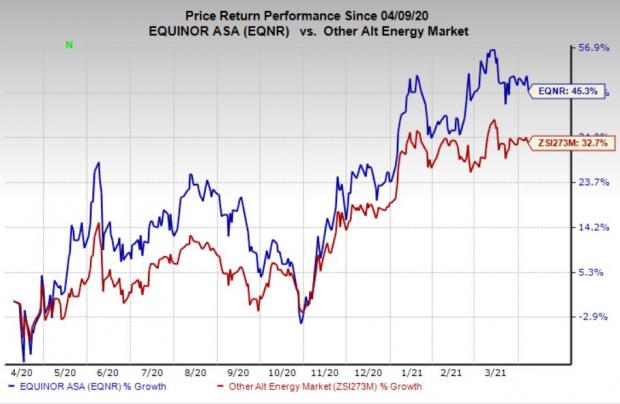 Evergy’s bottom line for first-quarter 2021 is expected to rise 12.2% year over year.