The proposal for the private placement of senior notes was announced by Icahn Enterprises on Apr 8. The company’s units have lost 0.8% yesterday, ending the trading session at $56.38.

As communicated, the notes offered are due to mature in 2027 and carry a 5.250% coupon rate. The offering price was fixed at 102% of the principal amount plus interest (accrued from Nov 15, 2020). Notably, Icahn Enterprises Holdings L.P. will act as guarantor to the offered notes issued to qualified institutional buyers in the United States and non-U.S. persons.

Icahn Enterprises intends to use the proceeds from the offering to redeem senior notes due to mature in 2022 and carrying a coupon rate of 6.250%.

Upon the fulfillment of customary closing conditions, the notes offering is predicted to close on Apr 12, 2021.

With a market capitalization of $13.6 billion, Icahn Enterprises presently carries a Zacks Rank #3 (Hold). The company benefits from its diversified businesses, acquired assets/businesses and healthy liquidity position. However, headwinds related to the pandemic are concerning.

In the past three months, Icahn Enterprises’ shares have gained 0.9% compared with 8.8% growth recorded by the industry. 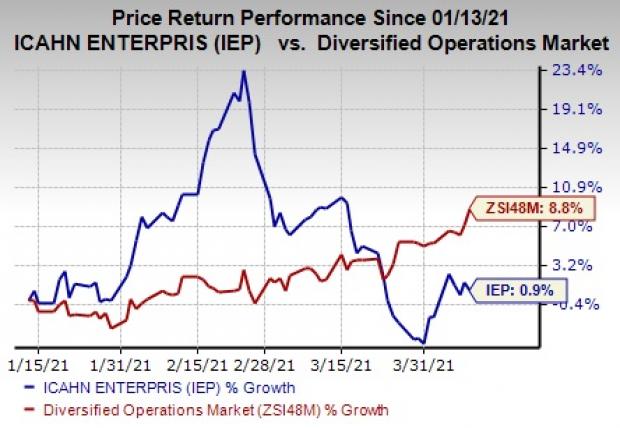 Furthermore, the Zacks Consensus Estimate for the company’s bottom line is pegged at one cent per share of earnings for the first quarter and a loss of two cents for the second quarter of 2021, reflecting an improvement from a loss of one cent and no change from the respective 60-day-ago figures.