Continental Resources, Inc. (CLR - Free Report) recently announced updates for first-quarter 2021 production, which was affected by adverse weather conditions in February. The unfavorable weather conditions resulted in almost 6 thousand barrels of oil equivalent per day of decline in production, of which 60% was oil. This preliminary data will give an insight into the company’s first-quarter earnings, scheduled to release on Apr 28.

First-quarter crude production is expected to be 152 thousand barrels of oil per day (MBbls/d), signaling a decrease from the year-ago figure of 200.7 MBbls/d. Natural gas production is expected to average 935 million cubic feet per day (MMcfpd), indicating a decline from the year-ago quarter’s 961 MMcfpd. The unfavorable weather affected first-quarter output of several other firms including Viper Energy Partners LP (VNOM - Free Report) .

Even though fall in production is expected to have affected Continental’s bottom line in the first quarter, the oil and gas price recovery might have offset the negative impacts of the same.

The Zacks Consensus Estimate for Continental’s first-quarter earnings is pegged at 22 cents per share. Loss of 8 cents per share was recorded in the year-ago period. In the past 60 days, the company has witnessed four upward and three downward estimate revisions.

The consensus estimate for first-quarter revenues is pegged at $932.7 million, indicating a 5.9% year-over-year rise.

The stock has risen 87% in the past six months compared with 97.9% jump of the industry it belongs to. 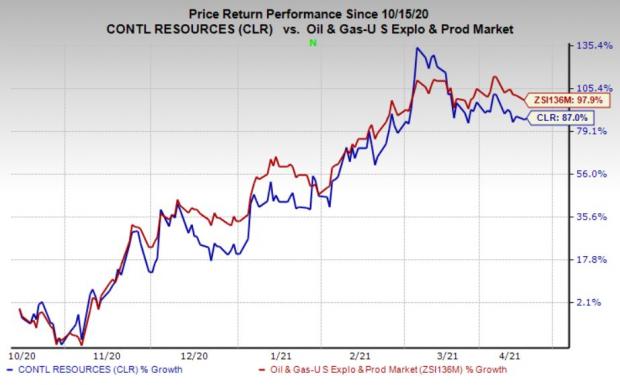 The company currently has a Zacks Rank #3 (Hold). Some better-ranked players in the energy space include CrossAmerica Partners LP (CAPL - Free Report) and Equinor ASA (EQNR - Free Report) , each having a Zacks Rank #2 (Buy). You can see the complete list of today’s Zacks #1 Rank (Strong Buy) stocks here.

Is it Wise to Hold SL Green (SLG) Stock in Your Portfolio Now?