Meanwhile, Brazilian carrier Azul (AZUL - Free Report) announced dismal traffic data for March as the country experiences a second wave of coronavirus. Another Brazilian airline Gol Linhas’ (GOL - Free Report) March traffic also got a huge blow due to the fresh spike in COVID-19 cases as was mentioned in the previous week’s write-up.

1. United Airlines’ management anticipates its first-quarter 2021 revenues to decline 66% from first-quarter 2019 to $3.2 billion due to coronavirus-led suppressed air-travel demand. While the forecast lies in the “favorable end” of the previously guided range of a decrease of 65-70%, it falls short of the current Zacks Consensus Estimate. For the first quarter, United Airlines, currently carrying a Zacks Rank #3 (Hold), estimates average daily core cash burn to be approximately $9 million per day.

2. American Airlines’ management expects first-quarter 2021 total revenues to decline approximately 62% from the figure reported in the same period of 2019. The carrier’s past outlook had called for a 60-65% plunge from the 2019 levels. Net loss in the same period is estimated to be $1.2-$1.3 billion. Excluding net special credits, the company expects the same to be roughly between $2.7 billion and $2.8 billion. Net loss per share excluding net special credits, is projected in the $4.29-$4.41 band. The Zacks Consensus Estimate for March-quarter earnings is pegged at a loss of $3.82.

Meanwhile, American Airlines’ management estimates capacity, measured in available seat miles, to slump 43.4% in first-quarter 2021 from the first-quarter 2019 level. Previously, the same was predicted to decrease around 45% from first-quarter 2019. Average fuel price (including taxes) per gallon is forecast to be nearly $1.70.

3. At Azul, traffic, measured in revenue passenger kilometers, dropped 13.4% in March from the February levels. In the same time frame, capacity contracted 5% in March, sequentially. Since traffic decline was more than capacity reduction, load factor (% of seats filled by passengers) skidded to 71.7% in March from 78.6% in February.

4. Southwest Airlines’ (LUV - Free Report) management reportedly recalled more than 2,700 flight attendants from a voluntary leave program that the Dallas-based airline offered last year due to significantly suppressed travel demand. With air-travel demand improving in the United States as more Americans get vaccinated, the recalls are aimed at supporting the anticipated increase in demand during summers.

5. With air-travel demand rising in the United States, particularly on the leisure front, Allegiant Travel Company’s (ALGT - Free Report) March traffic results were better than the February report. Traffic, measured in revenue passenger miles, increased 60.7% month over month in March. Also, load factor inched up to 55.8% in March from 52.8% recorded in February. The picture was rosy on the year-over-year front as well with traffic jumping 21.8% in March for scheduled service. 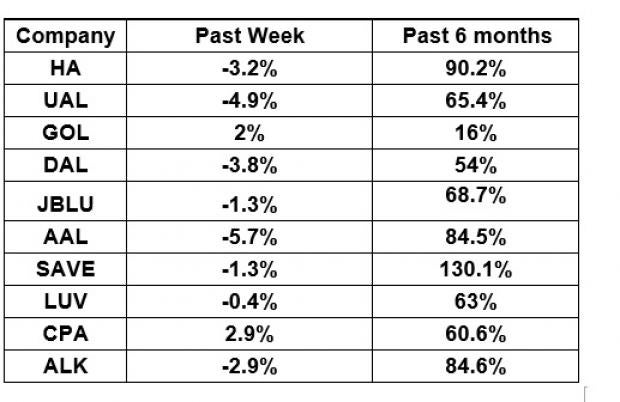