MoneyGram (MGI) Offers Its Payments as a Service to Sigue

Per the agreement, MoneyGram will allow Sigue to use its domestic and international receive network.

With this deal, Sigue will be able to plug into MoneyGram’s modern mobile and API-driven global network to be able to provide their customers with expanded services.

By aiding Sigue customers to use its global network, MoneyGram will benefit from expanded payment volumes made via network and process additive transactions. MoneyGram built a vast tech-enabled and scalable global payments infrastructure that can absorb significant volume at a very marginal cost.

Thus, the deal is win-win for both parties involved. While Sigue will gain from accessing a high tech global money transfer network without making any investment in infrastructure, MoneyGram will benefit from increased processing revenues from Sigue’s payments routed via its network.

This deal falls under MoneyGram’s new business line named ‘MoneyGram as a Service ,' which enables other companies to avail of its leading global money transfer network through its powerful API-driven infrastructure and best-in-class technology. This new business line, which was launched late last month, represents a significant growth opportunity for MoneyGram as it enters a market estimated to be $17 billion in 2024, seeing a CAGR of about 24% over the forecast period .

MoneyGram as a Service already partnered with Emergent Technology Ltd., which is the owner and operator of the G-Coin digital token. MoneyGram will facilitate fast and easy cash funding and payout of the purchase and sale of digital gold via its powerful API-driven infrastructure and best-in-class technology.

Following the COVID-19 outbreak, the company’s digital transactions gained an added impetus as more customers opted for digital channels to make their payments. This was clearly evident in the fourth quarter of 2020, which reflected the successful digital transformation journey of MoneyGram.

A robust digital arm bodes well for MoneyGram as its revenues have been declining since 2017 through 2020. Revenues are also persistently affected by a higher compliance-control strategy and stiff competition.

The company began laying the groundwork for its digital transformation four years ago to embrace the rapid changes brought about with the expansion of technology in the remittance industry. Its consumer direct channel MGO is the largest component of its overall digital business and a steady catalyst for customer acquisitions.

Via its digital business, the company is exploring new geographies and continuously wooing a completely new customer base.

With several fintech players, such as PayPal Holdings, Inc. (PYPL - Free Report) , Square, Inc. (SQ - Free Report) and others offering similar services at affordable rates, competition for MoneyGram naturally intensified over the years. Its close peer Western Union Co. (WU - Free Report) is also facing the same rivalry and is constantly pursuing technological investments to stay ahead in the race. 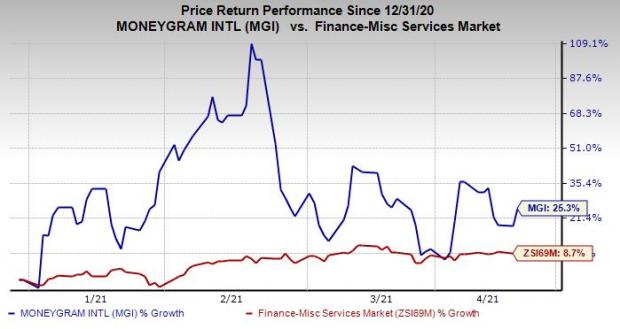 Will Vaccine Under the Lens Aid Teladoc's (TDOC) Prospects?