The company announced first-quarter cash dividend payment of 22.50 cents per share, which reflects a 26.8% decline from the fourth-quarter 2020 level of 30.75 cents. Its new annualized dividend amounted to 90 cents per share. Based on the closing price of $8.65 per share on Apr 14, the stock has a dividend yield of 10.4%.

The dividend is expected to be paid on May 12 to Antero Midstream’s shareholders of record as of Apr 28. Notably, the company is about to make 26 consecutive payments to shareholders since its November 2014 IPO. The decision from Antero Midstream’s board of directors to slash dividend payments can enable it to preserve cash. As of Dec 31, Antero Midstream had cash and cash equivalents of only $640,000, reflecting a significant decline from $2.4 million in the third quarter.

Importantly, Antero Midstream did not buy back shares during the March quarter. Therefore, at quarter-end, it had $150 million left under the $300-million share buyback plan, which was earlier extended till Jun 30, 2023.

The Zacks Consensus Estimate for the company’s first-quarter earnings is pegged at 22 cents per share, indicating a decline of 4.4% from the year-ago period. It has witnessed one downward estimate revision but no upward movement in the past 60 days. First-quarter revenues are expected to decline 9.8% year over year to $219.9 million.

Notably, the company outpaced the Zacks Consensus Estimate in three of the trailing four quarters and met once. It delivered a four-quarter average earnings surprise of 8.4%.

Shares of the company have increased 12.2% in the year-to-date period compared with 33.2% rise of the industry it belongs to. 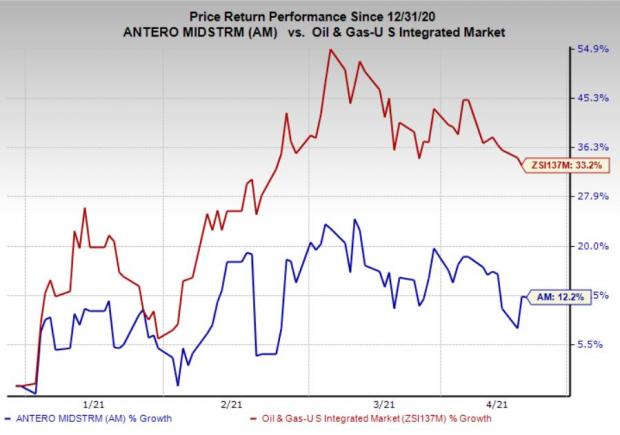 Equinor’s bottom line for first-quarter 2021 is expected to rise 188.2% year over year.