TELUS Corporation (TU - Free Report) , in association with the governments of Quebec and Canada, will invest almost C$30 million in the Chaudiere-Appalaches region. The telco plans to deploy its PureFibre network to connect more than 20,000 additional families and businesses in 35 communities.

TELUS believes that 99% of the region’s families and businesses will have direct access to its superfast fiber-optic network by September 2022. Also, it continues to deploy 5G technology in 25 additional municipalities to bridge the digital divide and drive innovation.

TELUS’ 4G LTE network already covers more than 90% of homes in the region. Over the past two decades, TELUS has invested almost C$30 billion in Quebec’s economy. This includes investments in infrastructure, spectrum licenses and operations to improve its networks, especially for remote communities.

The figure includes an investment of C$300 million since 2013 to deploy its PureFibre network in Quebec regions, with C$72 million in support from the federal and provincial governments. Per the Canada-Quebec Operation High Speed program, the provincial and federal governments have granted TELUS C$26 million to help deploy high-speed Internet to 5,000 households.

The network will cover virtually the entire premises in the greater Quebec City area, Chaudiere-Appalaches, Eastern Quebec and the Mauricie region. Currently, 93% of families and businesses in the region have access to the PureFibre network.

The pandemic has underscored the importance of fast and reliable connectivity for people to stay in touch with their loved ones. TELUS is committed to providing every home and business with access to high-speed Internet so that they get an equal opportunity to thrive in the digitized world.

The company expects balanced growth in its wireless and wireline businesses, driven by investments in high-speed broadband technology. It aims to continue generating positive financial outcomes and strong customer growth in 2021.

TELUS’ shares have gained 28.8% in the past year compared with 16.5% growth of the industry. 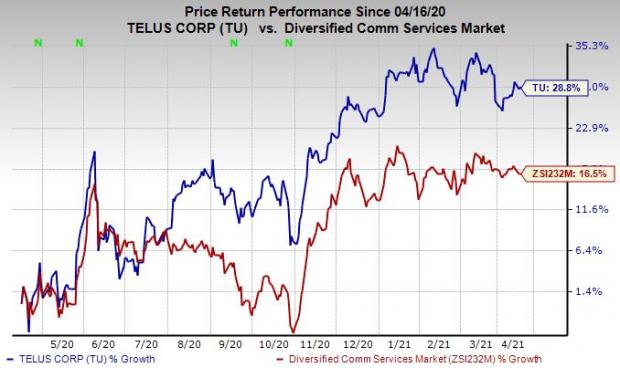 Ubiquiti delivered a trailing four-quarter earnings surprise of 37.1%, on average.

Cambium delivered a trailing four-quarter earnings surprise of 128%, on average.

Micron delivered a trailing four-quarter earnings surprise of 6.5%, on average.