The Boeing Company (BA - Free Report) has recently revealed delivery figures for its commercial and defense operations for the first quarter of 2021. The figures reflect a sizeable 54% surge in commercial shipments from the previous year’s first-quarter tally, while defense shipments rose 7.7%.

Combining both segments, Boeing’s total deliveries in the first quarter were 119 units compared with 89 units delivered in the year-ago period.

Boeing reported commercial deliveries of 77 airplanes in first-quarter 2021 compared with the 50 aircraft delivered in the first quarter of 2020. The rise in the year-over-year delivery figure could primarily be attributable to the return of the 737 MAX into service in November 2020, thus boosting the company’s first-quarter plane deliveries.

However, on a brighter note, the company was able to deliver 63 units of its single-aisle 737 jets compared with a mere five units delivered in the first quarter of 2020.

In its defense and space business, Boeing’s deliveries totaled 42 in first-quarter 2021, which witnessed a slight improvement from 39 dispatched in the prior-year period.

The improved delivery figure can be attributed to the heightened geopolitical tensions involving North Korea and the Middle East. This, in turn, might have increased shipment activities within the United States as well as across borders. We now await to see the delivery numbers of other jet manufacturers like Lockheed Martin (LMT - Free Report) and Embraer (ERJ - Free Report) for the first quarter, which may also reflect certain improvements this time around.

Boeing commenced the first quarter of 2021 on a bright note, after its 737 Max was certified by the U.S. Federal Aviation Administration (FAA) in November 2020 to fly again. The approval positively impacted the company, as airliners and aircraft operators across the world began to instill faith in the 737 line of aircraft and thus, once again, started taking deliveries. Such improvements might have been instrumental in making better deliveries for Boeing this time around.

So far in 2021, Boeing has toppled Airbus SE (EADSY - Free Report) in terms of orders, as it bagged 282 aircraft orders in total compared to Airbus's 39. Irrespective of this massive turnaround for Boeing, which was unthinkable a few months back, Airbus remained miles ahead in terms of deliveries made in 2021, so far. Boeing fell behind Airbus, as it could only deliver 77 aircraft during the first quarter compared to the latter’s 125 jets.

Moreover, per a recent CNN report, Boeing once again has drawn criticism as it announced a new problem related to its electrical system with the troubled 737 Max. Moreover, with the global surge in rising cases of the COVID-19 pandemic, both aircraft giants are likely to witness a dip in demand for their commercial aircraft, once again.

So, going ahead, only time will tell whether Boeing will outrun Airbus or will it be the other way round.

Shares of Boeing, a Zacks Rank #3 (Hold) company, have gained 88.1% in the past year compared with the industry’s growth of 25.8%. You can see the complete list of today’s Zacks #1 Rank (Strong Buy) stocks here. 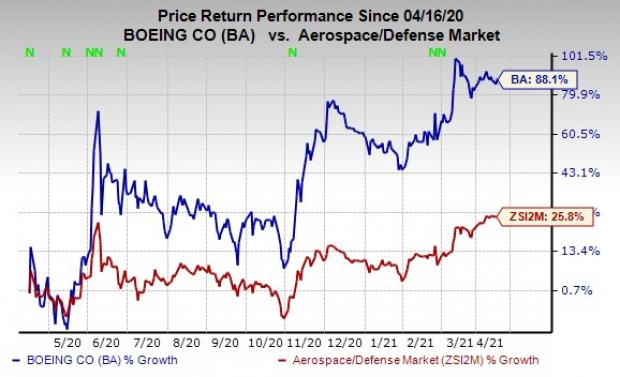