Based on the interim data from the mid-stage CMV study, Moderna has decided to begin the pivotal, phase III study on mRNA-1647 with 100 μg dose. The study will evaluate the candidate for the prevention of primary CMV infection in seronegative women aged 16-40 years. It is expected to start later this year.

Meanwhile, interim data from the phase I study on RSV vaccine candidate — mRNA-1345 — in younger adults demonstrated more than 20.5 times and 11.7 times increase in RSV neutralizing antibodies through one-month post-vaccination for RSV-A and RSV-B infections, respectively. The study is also evaluating the tolerability and reactogenicity of mRNA-1345 in older adults and children.

Moderna’s stock has gained 53.2% in the year so far against the industry's decline of 5.1%. 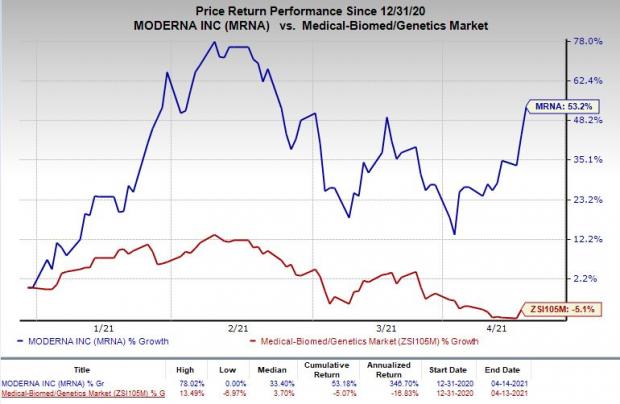 We note that the company has 14 different mRNA vaccine candidates in different stages of clinical development so far. HIV and flu vaccines will bring three new candidates to clinical-stage development. However, the company’s COVID-19 vaccine — mRNA-1273 — is its only commercialized vaccine, which was granted emergency use approval in the United States last year for adults, followed by several other countries. The company expects to generate $18.4 billion in 2021 from sales of these vaccines globally.

The phase III COVE study continues to evaluate mRNA-1273 in adult participants for follow-up data on efficacy and safety. The candidate is also being evaluated in pediatric and adolescent participants.

Earlier this week, the company announced updated data from the COVE study, which showed that the vaccine’s efficacy was more than 90% against cases of COVID-19 and more than 95% against severe cases of COVID-19, following six months of median follow-up after the second dose. Meanwhile, follow-up data from an NIH-led phase I study on mRNA-1273 showed that antibodies elicited by the vaccine persisted through six months following the administration of the second dose.

Notably, shares of Moderna and some other biotechs involved in the development of COVID-19 vaccines, including Pfizer (PFE - Free Report) , BioNTech (BNTX - Free Report) and Novavax, rose as the U.S. Centers for Disease Control and Prevention (CDC) and the FDA jointly recommended pausing of the use of Johnson & Johnson's (JNJ - Free Report) COVID-19 vaccine for ultra-rare blood clots following vaccination with the same. The temporary suspension of J&J’s vaccine boosts the prospect of these biotech players as they may garner additional supply agreements with different countries. Per a Bloomberg article, Pfizer and its partner BioNTech may deliver more vaccines to the European Union than the current target.

Moderna has a Zacks Rank #2 (Buy). You can see the complete list of today’s Zacks #1 Rank (Strong Buy) stocks here.