The move will create two standalone companies, while making sure to preserve the close partnership between Dell and VMware around technology development, sales and marketing.

Dell has a five-year commercial agreement with VMware to continue to market and sell the software maker’s products. Markedly, more than 35% of VMware’s revenue comes through Dell’s sales force.

Dell Technologies’ stock price jumped 8.1% to $100.25 a share, in after-hours trading Wednesday. The stock has gained 26.5% year to date compared with the Zacks Computers - IT Services industry’s rally of 10%. 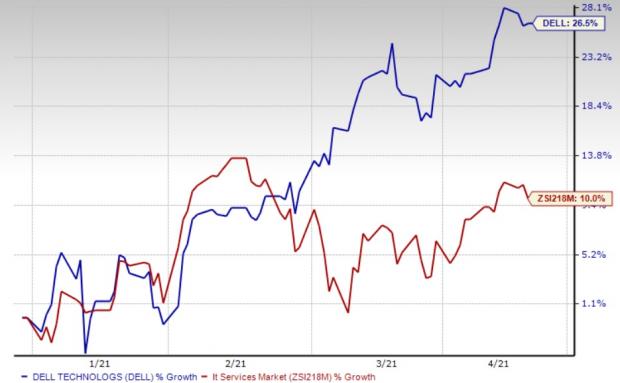 Under the terms of the agreement, Dell’s stockholders will receive about 0.44 shares of VMware for each of their shares, based on outstanding shares as of Mar 16.

VMware will distribute a special cash dividend of $11.5 billion to $12 billion to shareholders at the close of the deal, which is expected by fourth-quarter 2021. The estimated value of the cash dividend that VMware will provide to stockholders ranges from $27.43 to $28.62 per share, based on outstanding shares as of Mar 16.

The spinoff will provide Dell cash to reduce its debt load, which was $48.5 billion at the end of fourth-quarter 2020. The company’s core debt stood at $29.2 billion.

Dell, which owns 80.6% of VMware, will receive a payout between $9.3-$9.7 billion to add to the $5 billion of debt it was planning to pay down this year. VMware will also take $4.8 billion of debt off Dell’s books when the transaction is completed.

The Zacks Rank #3 (Hold) company recorded year-over-year shipment growth of 12.9%, the slowest among the top six vendors. This sluggish growth rate reflects on the company’s strategy of focusing more on business or enterprise PC and pull away from consumer products. You can see the complete list of today’s Zacks #1 Rank (Strong Buy) stocks here.

Further, strong consumer business, with robust uptake of Latitude and Precision notebooks and Commercial Chromebooks, remain noteworthy. The company is also witnessing robust growth in the XPS premium line and gaming systems including Alienware, with solid uptick for both notebooks and desktops.