The company was developing molnupiravir, an oral antiviral candidate, in two phase II/III studies — MOVe-OUT and MOVe-IN — as a potential treatment for outpatients and hospitalized patients with COVID-19, respectively. However, the company decided not to continue further development of the candidate in hospitalized patients as data demonstrated that clinical benefit is unlikely in this patient population.

Meanwhile, Merck also decided to discontinue the development of MK-7110 for the treatment of hospitalized patients with COVID-19 due to the longer amount of time required to support a potential Emergency Use Authorization (“EUA”) application.

We note that Merck is developing molnupiravir in collaboration with privately-held partner, Ridgeback Biotherapeutics. The company added MK-7110 to its pipeline with the acquisition of OncoImmune last year.

Merck’s shares have lost 6.3% so far this year compared with the industry’s decline of 0.5%. 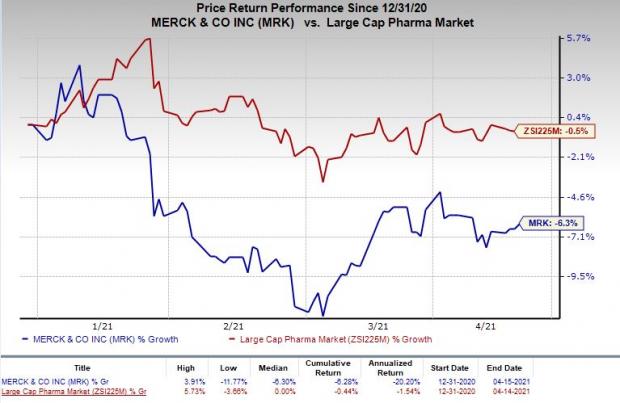 Both studies MOVe-OUT and MOVe-IN evaluated three doses of the candidate — 200 mg, 400 mg or 800 mg — twice daily for five days in the dose-finding phase II portion. Based on the data from the two phase II/III studies, the company decided to progress the 800mg dose of molnupiravir to the next stage of development in outpatients. The decision is also supported by data from a previously completed phase IIa dose-ranging study in outpatients.

Data from the MOVe-OUT study showed that treatment with molnupiravir resulted in lower hospitalizations or deaths compared to placebo. Although the data was not enough to provide a meaningful measure of clinical effect, treatment with the candidate indicated inhibition of replication of the virus. Meanwhile, the magnitude of the antiviral effect was largest for the 800mg dose and the effects were more pronounced in participants who were enrolled within five days following symptom onset.

Moreover, the external Data Monitoring Committee (DMC) suggested amendments to the MOVe-OUT study protocol based on data from the subgroup analyses. Based on DMC’s suggestion, Merck will amend the study protocol to include patients with symptom duration of less than or equal to five days and with at least one risk factor for progression to severe disease.

Data from the phase III outpatient study is expected by September or October. Merck plans to file for EUA in the second half of 2021.

Additionally, Merck plans to begin a new clinical program to evaluate molnupiravir for post-exposure prophylaxis in the latter half of this year.

As for MK-7110, the FDA had previously informed the company that data from studies conducted by OncoImmune will not be sufficient to support an EUA application. Additional data from new clinical studies which together with manufacturing preparations, would take time. Merck does not anticipate these new data to be available until the first half of 2022. A longer timeline for an EUA submission, clinical and regulatory uncertainties, and the availability of medicines for treating hospitalized COVID-19 patients, which includes Gilead’s (GILD - Free Report) Veklury and Lilly’s (LLY - Free Report) Olumiant, deterred the company from continuing the development of MK-7110.

Instead, the company has decided to focus its efforts on advancing molnupiravir in outpatient setting and accelerating the production of Johnson & Johnson’s (JNJ - Free Report) COVID-19 vaccine. The company signed an agreement with J&J last month to support the production of the latter’s vaccine.