The Nasdaq has popped roughly 8% since March 30 to outpace the S&P 500’s run to start the second quarter, as the tech-heavy index inches within touching distance of its records, just over a month after it fell into a correction. The fall from its mid-February highs coincided with a wave of bond selling and had some on Wall Street worried technology stocks were due for a huge downturn.

How quickly things change. The Nasdaq has recovered roughly all of its losses, which were perhaps more about profit-taking than a true shift in the fundamental view and inflation fears. It also turns out that some of bond selling that sent U.S. Treasury yields climbing was driven, in part, by Japanese banks and insurers trying to lock in returns to end their fiscal year.

Clearly, there are real concerns about the possibility of rising prices as the vaccine push continues and the U.S. economy reopens. But inflation worries have failed to materialize for years and bond yields have slipped recently.

The bull case for the market and the economy is a hard current to swim against right now. The economic reopening, coupled with pent-up demand has economists projecting U.S. GDP will grow by 6% or more in 2021, for its strongest expansion in over 30 years.

Meanwhile, the U.S. government has pumped trillions of dollars into the economy, with plans for more. The Fed is also committed to keeping its easy money policies in place for the foreseeable future, and the change to its preemptive approach means rates could stay low even if the economic boom really heats up.

Plus, Treasury yields are historically low, considering that the 10-year yield went above 3% in 2018 and hit above 5% in 2006—hovers at 1.59% right now. This means Wall Street has to keep chasing returns.

On top of all of this, Goldman Sachs (GS - Free Report) , JPMorgan Chase (JPM - Free Report) , and others have posted blowout results to start Q1 earnings season. JPM CEO Jamie Dimon said recently that the economic boom could last until 2023. And despite the recent strength of finance, energy, and other sectors tied to the economic cycle, technology likely remains the best long-term investment out there (also read: Big Banks Foreshadow the Improving 2021 Earnings Picture).

MSFT has surged 11% since the end of March to hit new records. We will get into the climb soon, but let’s first dive into Microsoft’s growing portfolio. The company announced on April 12 that it agreed to buy Nuance Communications Inc. (NUAN - Free Report) for $16 billion, making it the second-largest deal under CEO Satya Nadella—MSFT paid $26 billion for LinkedIn in 2016.

Nuance is at the forefront of speech recognition and AI technology and boasts customers in finance and other fields. Its offerings have also become popular in healthcare where more doctors want to dictate patient notes digitally and do far more with artificial intelligence. Nuance’s speech recognition and tech will be rolled into Microsoft’s booming cloud business for healthcare clients and beyond.

The Nuance deal helps MSFT challenge others in the speech recognition world and will likely play a major role going forward as industries race for efficiency and mass digitization. The ability to make strategic acquisitions, big and small, has helped the historic tech company diversify and grow, and the spree is unlikely to stop.

Microsoft’s ability to expand its cloud business alongside Amazon (AMZN - Free Report) and others during the last several years has transformed the tech icon’s outlook. Cloud plays a role across the entire company from Azure to Office, Xbox, remote work, and beyond. The company’s commercial cloud revenue surged 34% in Q2 to account for 40% of total sales, with overall sales up 17% to blow by our 9% projection.

Meanwhile, its adjusted earnings are projected to climb 28% and 10%, respectively. This is impressive for a firm that went public in the mid-1980s and highlights its steady cloud-focused income streams.

Microsoft’s earnings revisions help it grab a Zacks Rank #2 (Buy) and 20 of the 22 brokerage recommendations Zacks has are “Strong Buys.” Plus, MSFT finished last quarter with $132 billion in cash and equivalents. This stockpile is how it has funded its acquisitions, as well as buybacks. MSFT returned $10 billion to shareholders via repurchases and dividends last quarter, up 18% from the year-ago period—its dividend yield sits at 0.86%.

As we touched on, MSFT surged to new highs in April, breaking above $260 for the first time Friday. The run helped it break out of a period of relative stagnation, up 45% in the last year to lag its industry’s 58%. The stock has, however, more than double its industry in the last five years, up 360%. MSFT does trade at a premium to its industry, but Wall Street is clearly willing to pay up for the tech titan.

The recent run has pushed Microsoft right up to overbought levels in terms of RSI at 70. Therefore, a pullback could be in order before or after its Q3 report, even if it posts strong results and guidance. Yet, long-term investors shouldn’t be too concerned with trying to time MSFT, considering it has never been more essential to its customers, big and small.

Apple’s $2.24 trillion market cap makes it the world’s most valuable company, outpacing No. 2 MSFT’s $1.96 trillion. Like its peer, AAPL has jumped around 12% since the end of March, yet at $134 a share, the stock still trades 8% below its January records. This could give it runway to make a move around earnings.

Apple has already soared 90% in the past year, driven by its stability, loads of cash, 4-for-1 stock split, growth outlook, and more. The company closed last quarter with $84 billion in net cash and it plans to keep buying back stock and paying dividends as it tries to reach “a net cash neutral position over time,” which is great news for investors.

The stock trades below its year-long median in terms of forward 12-month earnings and at a slight discount to the technology sector. Apple earns a Zacks Rank #3 (Hold) right now, alongside an “A” grade for Growth and a “B” for Momentum in our Style Scores system. 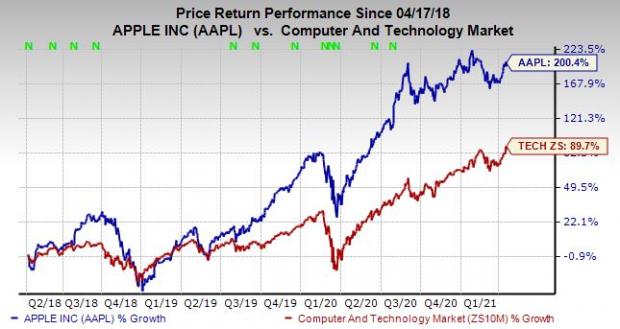 Apple posted 21% revenue growth last quarter, topping our revenue estimate by nearly 10%, driven by strength from its new iPhone 12. AAPL’s first 5G-capable smartphone helped iPhone revenue pop 17% to account for around 60% of total sales. It wasn’t just the iPhone that thrived in Q1, iPad and Mac sales surged 42% and 23%, respectively, with its Apple Watch and AirPods-heavy wearables unit up 29%.

Apple ended the quarter with over 620 million paid subscriptions, up 140 million from the year-ago period. Along with its subscription efforts, the firm aims to bring more of its chips in-house. And AAPL has reportedly considered entering the EV space. Plus, Apple has pushed its privacy efforts recently—a move that impacts Facebook (FB - Free Report) and others—as the issue comes to the forefront among governments and consumers.

Peeking ahead, Zacks estimates call for AAPL’s Q2 revenue to surge 33% to help lift its adjusted earnings by 55%. Overall, its adjusted FY21 EPS figure is projected to climb by 37%, with 2021 sales set to pop 23% to $337 billion, for its strongest growth since 2015. The company is expected to keep growing next year and it has topped our EPS estimates by an average of 19% in the trailing four quarters.

With all stocks, playing Apple for near-term gains around earnings is risky. But investors aiming to hold the world’s largest company for years to come might want to consider buying AAPL at an 8% discount, while the S&P 500 continues to break records.