Earnings season has started with a bang, with big banks setting the tone. With profitability coming in better than in the last few quarters and a stronger outlook for the following quarters, there’s reason to believe that the economy is truly on the mend.

Most encouragingly, big banks have released billions in loan loss reserves that they had earlier set aside to provide for bad debts because these aren’t expected to materialize now. So conditions appear to be better than anticipated, no doubt helped by the aggressive and timely fiscal and monetary measures.

One of the leading steel producers and metal recyclers in the U.S., STLD reported near-record steel shipments and record net sales, operating income and net income. Backlog was 50% above the previous high. It follows that cash flow was also solid.

And all this was possible because of the continued strength in demand along with historically low customer inventories throughout the supply chain that continued to support prices.

The company saw particular strength in the automotive, construction and industrial sectors.

On the negative side, input cost inflation remains a drag

The Zacks Rank #2 (Buy) company was already looking at revenue and earnings increases of 34.8% and 144.0%, respectively, this year. Considering the outlook for continued demand strength through the year and beyond, these results should drive upward revision in estimates.

Consequently, the shares look on their way up.

Known the world over for its Harley Davidson branded motorcycles, the company, under new CEO Jochen Zeitz, has made some adjustments in its product lineup that could be helping results. This change in focus is away from entry-level motorcycles toward touring, large cruiser and trike bike segments that are more profitable.

North America was particularly strong in the last quarter and may have also benefited from the stimulus checks.

Other initiatives include cost-cutting measures and a certified pre-owned bike program that may help build loyalty.

On the negative side, the EU has rolled back its tariff consideration, which could be a big blow for HOG. The company had been shipping its bikes from a Thai factory to circumvent the increased tariffs that were instituted as a retaliation to then President Trump’s tariffs on European steel and aluminum.

This real estate investment trust (REIT) that focuses on acquisition, development, operation and management of industrial real estate is benefiting from a surge in demand for space as global supply chains try to keep pace with the unleashing of pent-up demand. Prologis benefits from its well-positioned portfolio, differentiated customer offerings and investment capacity.

The surge in ecommerce sales is boosting demand for warehousing and distribution-related space, which along with the declining industrial vacancy rates indicates solid prospects for the company.

That said, rising industrial capacity in some markets could affect pricing.

The Zacks Rank #2 company was expected to grow top and bottom lines by a respective 8.4% and 3.9% going into the earning season but these estimates could be in for a revision after the solid results.

Sterling Bancorp (STL - Free Report) : The company reported earnings of 46 cents, topping the Zacks Consensus Estimate by 10.9% on revenue of $248 million that topped by 2.3%.

But the bigger news that hasn’t been well received by shareholders of either company, is Sterling’s all-stock merger of equals with Webster Financial in a $10.3 billion deal. Sterling shareholders will receive 0.463 of a Webster share for each of their Sterling shares for a total 49.6% share of the combined entity, which will be called Webster.

The goal is to create a big Northeast bank with greater scale and resources to invest in key areas, such as Webster’s commercial banking, health savings and consumer and digital banking businesses. Webster Chairman, President and CEO John R. Ciulla said there were “exceptional financial benefits” to the merger that was unanimously approved by the boards of both companies.

The Zacks Rank #2 company currently expects earnings growth of 60.0% in 2021 on flattish revenues. 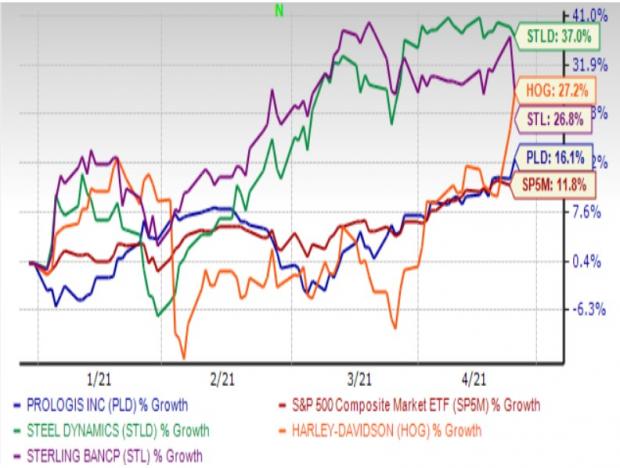