The Boeing Company (BA - Free Report) recently secured a $436.7-million contract for full rate production of Apache AH-64E aircraft. Work related to the deal is scheduled to be completed by Feb 28, 2025.

The contract was awarded by the U.S. Army Contracting Command, Redstone Arsenal, AL, while the entire task will be executed in Mesa, AZ.

Boeing’s AH-64 Apache has already emerged as the world’s most advanced, multi-role combat helicopter that is used by the U.S. Army and a growing number of international defense forces. Its AH-64E is the latest version of the AH-64 gunship, which is equipped with new sensors, avionics and improved night operation capabilities.

In addition, it has an infrared suppressing exhaust system as well as chaff and flare dispensers, which jointly reduce the chances of being hit by enemy air defense missiles. Notably, militaries of nations, such as India, the United Kingdom, Netherlands, Morocco, Israel and Egypt, among many others, alongside the United States have the Apache Helicopters in their arsenal.

Boeing has already delivered more than 2,400 Apaches to various customers globally. In recent times, increasing geopolitical tensions across the world have prompted both developed and developing nations to effectively increase their defense budget. It is imperative to mention in this context that the fiscal 2022 discretionary budget reflects funding request worth $753 billion for the U.S. defense programs, implying an annual increase of 1.7%. If approved, fresh order flows from the Pentagon, like the latest one, will boost growth prospects of Boeing.

Per a report by Mordor Intelligence firm, the global military rotorcraft market is expected to witness a CAGR of 3% during 2020-2025 period. With North America dominating this market space, such projections bode well for U.S. helicopter-makers like Boeing, Lockheed Martin (LMT - Free Report) and Textron (TXT - Free Report) .

Boeing’s share price has surged 73.4% in the past year compared with the industry’s growth of 25.2%. 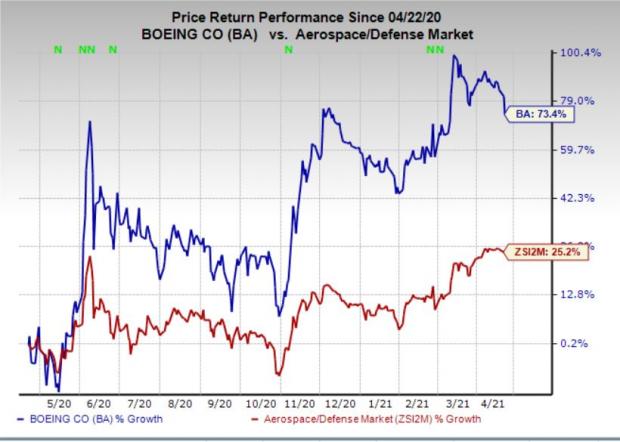 AAR Corp. delivered an average earnings surprise of 129.07% in the trailing four quarters. The Zacks Consensus estimate for fiscal 2021 earnings has improved 14% over the past 60 days.