Kansas City Southern (KSU - Free Report) shares soared 15.3% in the last trading session to close at $295.50. The move was backed by solid volume with far more shares changing hands than in a normal session. This compares to the stock's 14.9% gain over the past four weeks.

The uptick was driven by Canadian National Railway Company's (CNI - Free Report) proposal to buy Kansas City Southern in a cash-and-stock deal valued at $33.7 billion, or $325 per share. The merger is expected to be accretive to the Canadian railroad operator's earnings per share in the first full year following Canadian National Railway assuming control of Kansas City Southern. Following the closure of the deal, the merged entity is likely to result in a safer, faster, cleaner and stronger railway, apart from facilitating trade between the United States, Canada and Mexico. 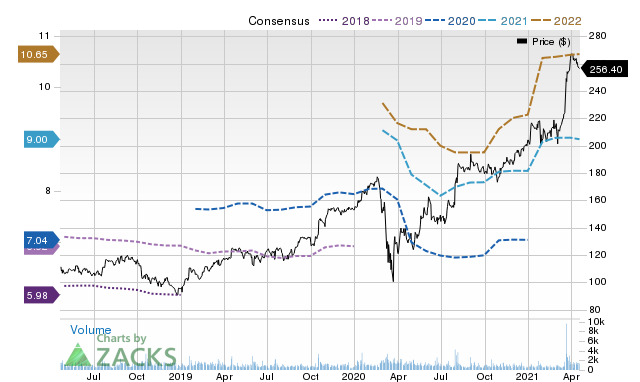 This railroad company is expected to post quarterly earnings of $2.21 per share in its upcoming report, which represents a year-over-year change of +92.2%. Revenues are expected to be $735.78 million, up 34.3% from the year-ago quarter.

Earnings and revenue growth expectations certainly give a good sense of the potential strength in a stock, but empirical research shows that trends in earnings estimate revisions are strongly correlated with near-term stock price movements.

For Kansas City Southern, the consensus EPS estimate for the quarter has been revised 0.8% higher over the last 30 days to the current level. And a positive trend in earnings estimate revision usually translates into price appreciation. So, make sure to keep an eye on KSU going forward to see if this recent jump can turn into more strength down the road.