Stocks popped Wednesday after they slipped to start a busy week. Wall Street is now engulfed by earnings reports from bellwethers in finance, technology, and beyond. The next several weeks are poised to showcase strong results compared to last year’s rough first quarter, while guidance hopefully points to an economic boom in the U.S.

Overall earnings jumped 59.2% on 6.1% higher revenue for these 75 firms, with total first quarter 2021 earnings projected to climb 28.1% from the same period last year on 6.3% stronger sales.

Tuesday saw the first of the so-called FAANG stocks report, with Netflix (NFLX - Free Report) posting disappointing subscriber growth, which could be a sign of the continued economic reopening that’s happening in many areas of the U.S (also read: A Very Strong Earnings Picture for Q1 and Beyond).

The next several weeks will see nearly all of the world’s largest companies report their quarterly results, including Apple (AAPL - Free Report) and Microsoft (MSFT - Free Report) . The list of titans will also include two e-commerce standouts with vastly different business models: Amazon and Shopify.

Both stocks are set to report during the last week of April and AMZN and SHOP are both hoping to break out of their respective slumps that have seen them underperform the S&P 500 in the past six months. Now let’s see if investors should consider buying either Amazon or Shopify ahead of their Q1 earnings releases… 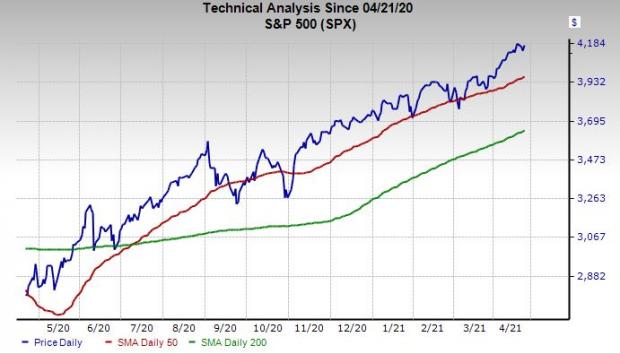 Shopify’s most basic package starts with a monthly fee of $29 for sellers and a 2.9% digital transaction fee. The company’s various offerings and add-ons include reporting, point-of-sales tech, and much more. The company has also continued to partner with heavyweights such as Walmart (WMT - Free Report) and Facebook. And SHOP went on a stellar run long before the coronavirus, having grown its revenue by roughly 50% or higher every year since it went public in 2015.

The pandemic was clearly a game-changer for SHOP, as businesses and entrepreneurs all raced to start or improve their digital commerce offerings. Shopify’s 2020 revenue climbed 86% to $2.93 billion for its best growth since FY16, while its Gross Merchandise Volume jumped 96% to $120 billion. The company also blew away our adjusted earnings estimate in the trailing four quarters.

Shopify’s growth within the booming e-commerce world sent it stock price soaring. The stock has now climbed 3,500% in the last five years, including a 400% run in the past 24 months. Yet, as we touched on earlier, Shopify shares have cooled off, up only 13% in the last six months. This lags the S&P 500’s 22% climb and highlights the return of the cyclical trade that began after the election and the early coronavirus vaccine news in November. 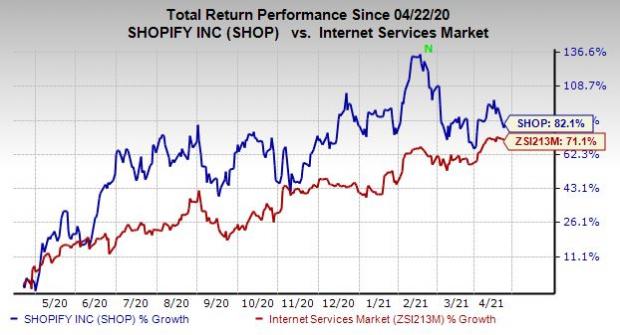 The recent underperformance appeared due and SHOP still hit new records during this stretch. The stock closed regular trading Wednesday 24% below its mid-February records at $1,142 a share. The recent downturn has also cooled down its valuation, with it now trading around 20% below its year-long median at 31X forward 12-month sales. And the stock sits below neutral RSI levels (50) at 47, which could give it runway.

These estimates mark a slowdown in terms of percentage change, but that is simply how it works when the numbers get larger. A better way to understand Shopify’s impressive growth outlook is to understand that it’s expected to make $1.1 billion more in 2021 then in did last year, and it pulled in a total of $1.1 billion in 2018.

Shopify’s overall earnings outlook has improved since its last report and it lands a Zacks Rank #3 (Hold) at the moment, along with an “A” grade for Growth in our Style Scores system. Therefore, some investors might want to consider Shopify down around 24% from its highs, especially since e-commerce still has miles of room left to grow. For example, e-commerce accounted for 14% of total U.S. retail sales last year, up from 11% in 2019, according to the U.S. Census Bureau.

Amazon has been in the news a ton recently and has come under attack from various groups and both sides of the political aisle. But that’s what happens when a company becomes one of the largest private employers in the U.S. and the world. Amazon has come under scrutiny in Washington for some of its practices, including how it treats other retailers and third-party sellers on a platform it controls.

AMZN CEO Jeff Bezos, who is set to transition out of the role, has pointed out that other retailers, including the likes of Target (TGT - Free Report) also sell their own products that compete against other brands in stores and online. More importantly, the company is sure to fight back against any real legal action that might be taken. And the stock has popped 10% since the end of March, as Wall Street shrugs off any worries.

The Seattle giant was built for the coronavirus environment and it’s ready to thrive for years to come through growing market-share in retail and beyond. The company’s AWS cloud computing unit was already booming before the pandemic spurred businesses to speed up their digitalization and remote capabilities. The company is also now the third-largest digital advertising player behind Google GOOGL and Facebook (FB - Free Report) .

Amazon is expanding its own brick-and-mortar efforts given that e-commerce still accounts for a small amount of total retail sales in the U.S., as we mentioned earlier with Shopify. The company also continued to rake in money from its Prime-heavy subscription unit, as it also aims to compete against Netflix, Spotify SPOT, and others.

Amazon has crushed our bottom-line estimates in the trailing three quarters and its consensus earnings estimates have popped. AMZN grabs a Zacks Rank #3 (Hold) at the moment, along with an “A” grade for Growth. Plus 30 of the 34 brokerage recommendations Zacks has for Amazon are “Strong Buys,” with the other four at a “Buy.” And it landed No. 3 in terms of financial strength in last year’s Management Top 250 rankings, behind only AAPL and MSFT.

Amazon stock is up 42% in the last year, to lag well behind many other growth tech names. But the stock has popped recently and closed Wednesday 5% below its 52-week highs. AMZN also sat at 61 in terms of RSI, which gives it room before it hits the overbought threshold of 70. And at 3.4X forward 12-month sales, it trades below its own median and at a discount to its industry’s 3.9X, as well as Apple’s 6.4X and Microsoft’s 10.9X.

3 Great Growth Stocks to Buy Now at a Discount