Notably, the company’s shares have appreciated a massive 99.5% over the past year, outperforming the78.5% rally of the industry it belongs to. 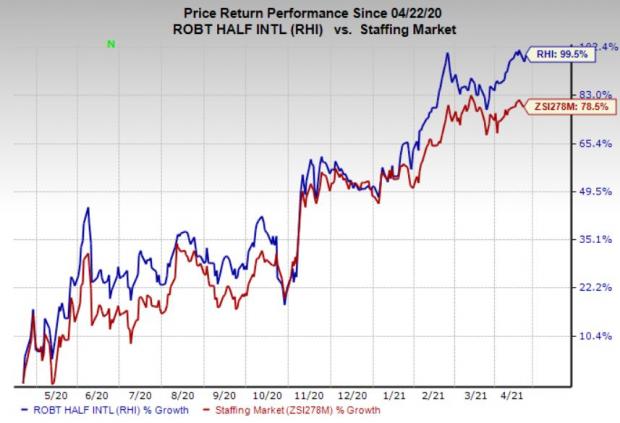 The quarter had 62.3 billing days compared with 63.1 in the year-ago quarter. At present, Robert Half operates 322 staffing locations worldwide, with 86 locations situated in 17 countries outside the United States.

Robert Half ended the quarter with cash and cash equivalents balance of $498 million compared with $547 million witnessed at the end of the previous quarter. The company generated $68 million of cash from operations and capital expenditures were $9.7 million. It paid out $44 million in dividends and repurchased shares worth $61 million in the reported period.

Equifax (EFX - Free Report) reported better-than-expected first-quarter 2021 results. Adjusted earnings of $1.97 per share beat the Zacks Consensus Estimate by 29.6% and improved on a year-over-year basis. Revenues of $1.21 billion outpaced the consensus estimate by 7.9% and improved 26.6% year over year.