3 Great Growth Stocks to Buy Now at a Discount

The market pulled back sharply in early-afternoon trading Thursday on reports that the Biden administration is considering roughly doubling capital gains taxes on the wealthy. The news, which hardly means any real action will be taken, sent the Dow, the S&P 500, and the Nasdaq all down roughly 0.93% during regular hours.

The dip marks the third down day of the week, yet the S&P 500 hovers just around 1% below last week’s records. Alongside the capital gains story, Wall Street might be nervous about rising coronavirus cases in India and elsewhere.

Yet, the strong fundamental backdrop in the U.S. seems to remain firmly in place as first quarter earnings results and guidance paint an impressive growth picture. Zacks estimates call for the S&P 500’s earnings to jump around 28% in the first quarter on 6.3% higher revenue (also read: A Very Strong Earnings Picture for Q1 and Beyond).

The vaccine rollout has helped the U.S. economy start to return to something far closer to normal. This push has helped economists project roughly 6.5% U.S. GDP growth in 2021, which would be the best in over 30 years. The injection of trillions of dollars into the economy, coupled with low interest rates could further stoke the economic resurgence. 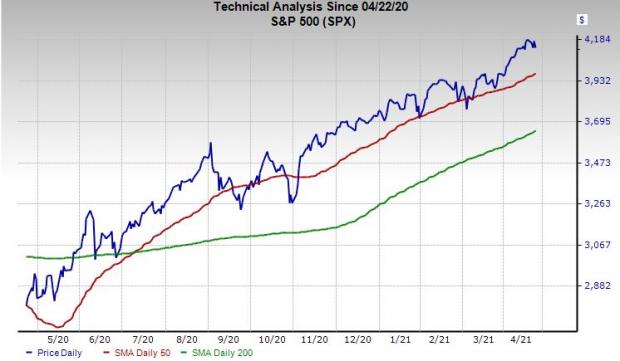 VEEV helps its nearly 1,000 clients’ critical business functions work more seamlessly through cloud-based architectures and mobile applications for R&D, training services, regulatory processes, and nearly anything else a firm in these fields might need. VEEV’s clients include the likes of Merck and Eli Lilly, as well as smaller biotech firms, with a broader goal to “helps companies of all sizes bring products to market faster and more efficiently, and maintain compliance.”

The California-based company's solutions have clearly struck a chord with clients, given that its revenue has climbed by 25% for seven straight years. This run includes a 33% jump last year (FY21 – ended Jan. 31) that saw it pull in $1.5 billion. 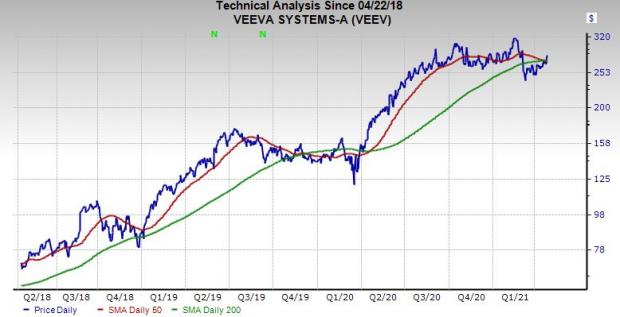 Veeva topped our bottom-line estimates in the trailing four periods by an average of 14%. And VEEV shares have soared around 290% in the last three years. But its stock tumbled following its Q4 financial report on March 2 to extend a downturn that began after it broke records in mid-February. Luckily, the stock has regained some momentum, up nearly 20% since March 8—the day the Nasdaq fell into a correction.

Despite the resurgence, the stock sits below overbought RSI levels and it still trades roughly 13% below its all-time highs, which could provide it runway. VEEV is also trading at a 10% discount to its own year-long median in terms of forward 12-month sales. Plus, 14 of the 19 brokerage recommendations Zacks has for Veeva are either “Strong Buys” or “Buys.”

Looking ahead, Zacks estimates call for Veeva’s fiscal 2022 revenue to climb another 21%, with FY23 projected to come in 19% higher to reach $2.1 billion. At the bottom end of the income statement, the company’s adjusted earnings are projected to climb by 10% and 18%, respectively over this stretch. And the company’s positive earnings revisions help it land a Zacks Rank #2 (Buy).

Fiverr was founded in 2010 to create an on-demand, e-commerce-esque experience that “makes working with freelancers as easy as buying something on Amazon." The coronavirus highlighted the possibilities of the work wherever, whenever world and showcased the continued growth of e-commerce.

Fiverr joins together multiple secular trends and its Service-as-a-Product model is relatively unique in a crowded SaaS space. The company aims to connect small businesses and other organizations with people and freelancers for defined “Gigs,” from graphic design and programming to digital marketing to translation.

The company’s digital service catalog has expanded from eight categories a decade ago to over 500 categories, across nearly 10 verticals for almost anything digitally-based. Fiverr went public in 2019 and largely makes its money through fees from the freelance transactions on its platform.

Fiverr stresses that businesses aren’t hiring temp workers. Instead, they are buying defined, service-based products, with transparent pricing and due dates and firms can browse and search for various options for whatever it is they need, based on “transaction history, reviews, and a past work portfolio.”

The company’s revenue jumped 42% in 2019 and 77% last year. FVRR said over 3.4 million customers bought services from freelancers across more than 160 countries in the 12-month period ended on December 31.

Zacks estimates currently call for Fiverr’s revenue to climb 51% in 2021 to hit $286.4 million and another 34% next year. Perhaps more impressively, the company’s adjusted EPS figures are projected to climb by 76% in FY21 and 150% higher in FY22.

FVRR, like VEEV, got caught in the wave of tech selling that began in mid-February. The stock has tried to fight back some of its recent losses, but it still trades roughly 35% below its records at $217 a share.

Fiverr had plenty of room to fall and many investors likely took home profits on a stock that’s is up 500% in the last year, including its recent pullback. And the nearby chart showcases that Fiverr is currently trading between its 50-day and 200-day moving averages.

Fiverr currently lands a Zacks Rank #3 (Hold), alongside a “B” grade for Growth in our Style Scores system. The recent downturn has also pushed it below neutral RSI levels (50) at around 46. This could provide ample runway for it to climb, especially if it’s able to impress Wall Street with its first quarter results that are due out on May 6.

Chewy is an e-commerce-focused pet store with relatively speedy delivery that sells pet food, supplies, treats, medications, and nearly anything else imaginable for a wide variety of animals. CHWY, which was founded back in 2011 and went public in 2019, carved out a solid niche within a crowded digital commerce world dominated by Amazon (AMZN - Free Report) , Target (TGT - Free Report) , Walmart (WMT - Free Report) , and others.

The company has also diversified and rolled out offerings that could prove compelling over the long haul. CHWY in October launched its telehealth service, dubbed “Connect with a Vet.”

The telehealth service, only available to autoship customers, is likely to be a hit in the age of Teladoc (TDOC - Free Report) as people opt for convenience where they can. Along the same lines, the firm announced on November 12 that it was expanding its pharmacy unit to “offer compounded medications that are customized to the specific needs of pets.” 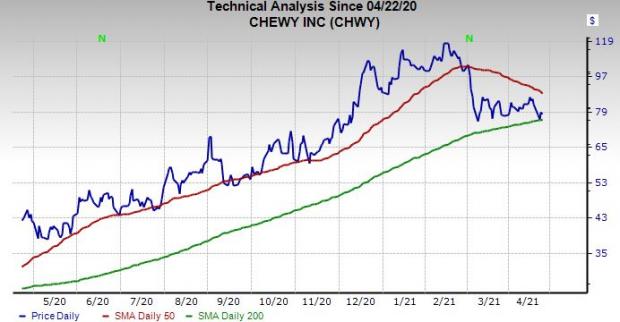 Investors should know CHWY’s autoship business, which allows people to have dog food and anything else delivered automatically at predetermined intervals, accounts for roughly 70% of its total revenue. This creates consistent revenue streams among loyal pet owners.

Chewy’s overall earnings estimates have soared since its fourth quarter release on March 30. This positivity helps the stock land a Zacks Rank #2 (Buy), alongside a “B” grade for Momentum and an “A” for Growth. The upside potential didn’t prevent CHWY shares from getting hammered during the tech selloff. The stock closed regular trading Thursday at $79.60 a share, 33% below the $120 it hit in February.

The downturn sent Chewy into overbought territory (30) in early March and it currently hovers well underneath neutral RSI levels at 43. The stock just bounced up off its 200-day moving average. When it comes to valuation, Chewy trades at 3.4X forward sales, which marks a 45% discount to its own highs and comes in well below fellow niche e-commerce standout Etsy’s (ETSY - Free Report) 11.7X. All of this might make Chewy an attractive growth play to possibly scoop up on the dip.