The U.S. telecom stocks witnessed a topsy-turvy week with skepticism creeping within the industry ranks about the potential benefit from President Biden’s ambitious infrastructure investment plan on one hand and optimism regarding partial recovery in broad-based markets on the other. With better-than-expected performances from the hitherto reported companies, the overall market sentiment was overtly positive and appeared to portend that the worst from the COVID-19 virus was probably over. Moreover, promise of federal support to ramp up domestic chip production capacity and reduce supply bottlenecks acted as a catalyst.

The government’s $2 trillion infrastructure investment plan, which includes $100 billion provision to significantly expand broadband access to Americans, has seemingly fueled an intense lobbying war among cable and wireless companies with each vying for a greater pie in the market. Speculations are rife that the government initiative is likely to favor traditional fiber optic cable, which is a setback for firms that leverage on wireless radio waves, 5G and satellite-based innovative technologies for providing Internet facilities. Experts widely believe that this, in turn, could lead to missing the broader objective of bridging the digital divide between the rural and urban areas. They argued that the overall focus should be on openness to embracing a technologically inclusive approach for universal broadband availability and affordability.

Meanwhile, global smartphone sales witnessed a strong rebound in the first quarter driven by a robust demand curve and steady 5G deployments across the globe. Despite supply-chain disruptions and chip shortage, an uptrend in handset sales signified partial recovery from the coronavirus-induced adversities and propelled the industry toward the later half of the past week. All-around strength and positive momentum from companies that reported quarterly results so far with favorable commentary about the forthcoming quarters further drove the industry higher.

1.     Verizon Communications Inc. (VZ - Free Report) started 2021 on a strong note, reporting relatively solid first-quarter results with the top and bottom line beating the respective Zacks Consensus Estimate. Backed by a disciplined network strategy for long-term growth along with a focused roadmap for technology leadership, the company witnessed a healthy demand curve across core businesses. Verizon expects to continue this momentum throughout the year and beyond driven by customer-centric business model and diligent execution of operational plans.

Excluding non-recurring items, non-GAAP net income for the reported quarter was $1.31 per share, which surpassed the Zacks Consensus Estimate by a couple of cents. Total quarterly operating revenues increased 4% year over year to $32,867 million with growth across all the business segments. The top line beat the consensus estimate of $32,440 million.

2.     AT&T Inc. (T - Free Report) reported strong first-quarter 2021 results with solid subscriber growth backed by a resilient business model and robust cash flow position driven by a diligent execution of operational plans. Riding on a healthy traction from HBO Max and fiber broadband businesses, both adjusted earnings and revenues beat the Zacks Consensus Estimate. The company expects to continue investing in key areas of 5G, fiber and HBO Max and adjust its business according to the evolving market scenario to fuel long-term growth, while maintaining a healthy dividend payment and actively pruning debt.

Excluding non-recurring items, adjusted earnings were 86 cents per share compared with 84 cents in the year-earlier quarter. Adjusted earnings for the first quarter beat the Zacks Consensus Estimate by 9 cents. Quarterly GAAP operating revenues increased 2.7% year over year to $43,939 million, largely due to higher equipment sales within the Mobility business and growth in advertising and subscription-based revenues within WarnerMedia. The top line beat the consensus mark of $42,728 million.

Net income in the March quarter was SEK 3,187 million ($379.5 million) or SEK 0.96 (12 cents) per share compared with SEK 2,156 million or SEK 0.65 per share in the prior-year quarter. The improvement was primarily driven by stronger EBIT. The bottom line, however, missed the Zacks Consensus Estimate by 1 cent. Quarterly net sales remained almost stable year over year at SEK 49,778 million ($5,928.2 million), but missed the consensus estimate of $6,349 million.

Quarterly non-GAAP net income was $31.6 million or 99 cents per share compared with $6.4 million or 21 cents per share in the year-earlier quarter. The bottom line beat the Zacks Consensus Estimate by 33 cents. NETGEAR generated net revenues of $317.9 million, up 38.3% year over year, primarily driven by strong demand for Wi-Fi 6 offerings. The top line surpassed the consensus estimate of $310 million.

On a GAAP basis, net loss in the March quarter was $5.2 million or loss of 4 cents per share. The figure was narrower than net loss of $31.7 million or loss of 24 cents per share in the prior-year quarter. The year-over-year improvement was mainly driven by higher revenues. The bottom line was narrower than the Zacks Consensus Estimate of a loss of 5 cents. Quarterly revenues totaled $146.5 million compared with $145.3 million in the year-ago quarter, mainly driven by strength in subscriber equipment sales and higher service revenues. The top line matched the consensus mark of $147 million. 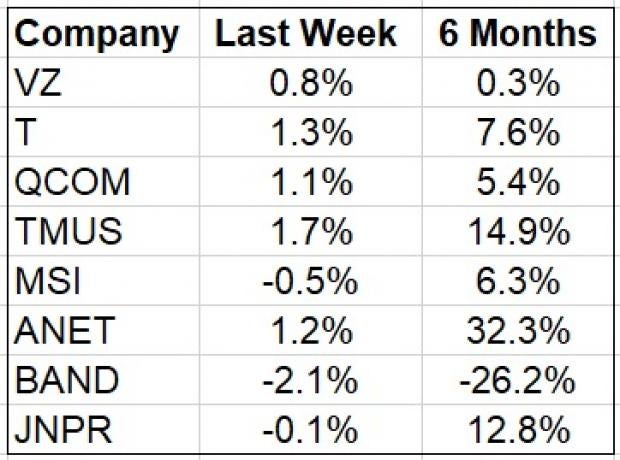 In the past five trading days, T-Mobile has been the best performer with its stock gaining 1.7%, while Bandwidth declined the most with its stock falling 2.1%.

Over the past six months, the Zacks Telecommunications Services industry has jumped 15.9% on average, while the S&P 500 has gained 21%. 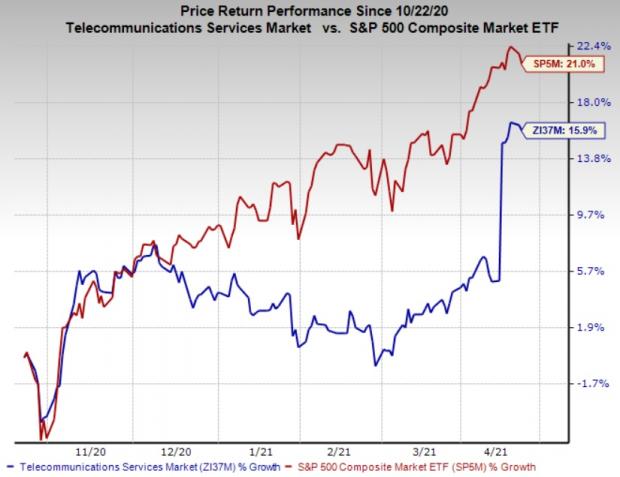