Financial terms of the deal remain undisclosed. As a result of this divesture, Summit Community Bank will assume roughly $193 million, and $57 million of deposits and loans respectively.

The president and CEO, MVB Financial, Larry F. Mazza said, “As trusted partners, MVB Bank and Summit Community Bank share a successful history, including a prior branch transaction in which Summit purchased MVB’s Eastern Panhandle West Virginia banking centers in 2020. This transaction is the latest in a series of opportunistic activities undertaken by MVB that have resulted in industry-leading value creation for MVB shareholders.”

Per Summit Bank’s president and CEO, H. Charles Maddy, III, “Summit’s purchase of these branches represents an outstanding opportunity to expand our presence in and commitment to the Charleston-Huntington, West Virginia, market as well as adds the convenience of more banking locations for our clients.”

This divestiture is part of MVB Bank’s aim to be focused on its core commercial markets in North Central West Virginia and Northern Virginia, and the Fintech vertical.

In March 2021 Wells Fargo (WFC - Free Report) has inked a definitive agreement to sell its Corporate Trust Services business to Australia-based Computershare Limited for $750 million. This is in line with the company’s strategy of concentrating on businesses core to its consumer and corporate client base. The transaction, likely to close in the first half of 2021, is still subject to customary closing conditions.

Over the past six months, shares of MVB Financial have surged 133.4%, outperforming the industry’s 3.8% rally. 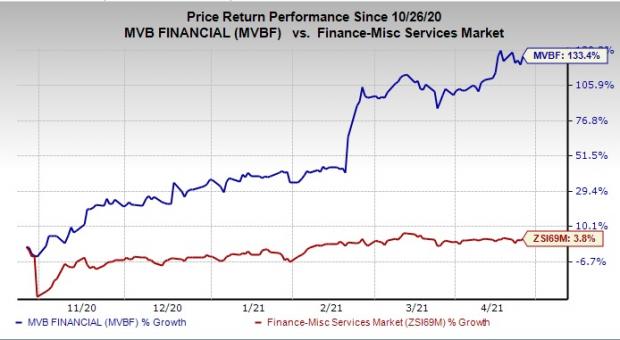 Entergy (ETR) to Report Q1 Earnings: What's in the Cards?