The stock gained 5.8% since the earnings release on Apr 20, as the company‘s earnings guidance for second-quarter 2021 was impressive. ManpowerGroup expects earnings per share in the range of $1.36-$1.44, which is above the current Zacks Consensus Estimate of $1.34 per share. In the past year, the stock has gained 64.3% compared with 72.9% increase of the industry it belongs to. 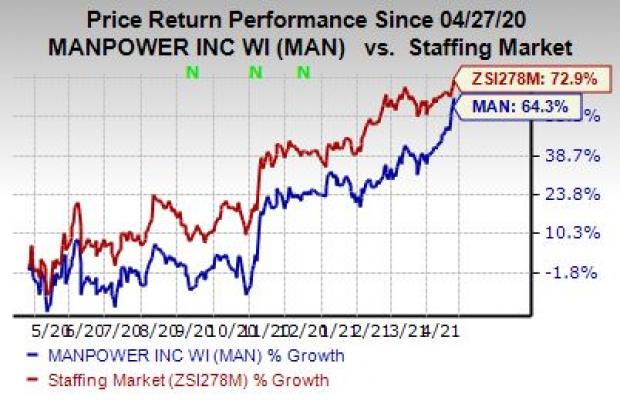 Revenues of $4.92 billion beat the consensus mark by 5.6%. The top line inched up 7% year over year on a reported basis and 1% on a constant-currency (cc) basis.

Northern Europe revenues moved up 6.1% on a reported basis but slipped 2.3% at cc to $1.13 billion. The segment contributed 23% to total revenues in the quarter.

The company used $795.5 million of cash from operating activities, while Capex was $38 million in the quarter.

Equifax’s (EFX - Free Report) first-quarter 2021 adjusted earnings of $1.97 per share beat the Zacks Consensus Estimate by 29.6% and increased on a year-over-year basis. Revenues of $1.21 billion outpaced the consensus estimate by 7.9% and rose 26.6% year over year on a reported basis as well as on a local-currency basis.

Factors to Watch Ahead of Kraft Heinz's (KHC) Q1 Earnings