Further, the figure increased 51% year over year and 3.9% sequentially.

The company reported revenues of $4.3 billion, which beat the Zacks Consensus Estimate of $3.9 billion. The top line also comfortably surpassed the management’s guidance of $3.79-$4.11 billion.

Further, the top-line figure improved 29% from the year-ago quarter and 5.2% from the prior quarter.

Coming to the price performance, Texas Instruments has returned 52.6% in a year compared with the industry’s growth of 46.5%.

However, softness in the enterprise systems market was an overhang in the reported quarter.

Further, the uptrend in personal electronics, owing to the rising demand for electronic gadgets for remote working and entertainment amid the pandemic, is likely to benefit the company in the days ahead.

Also, its strong investments in new growth avenues and competitive advantages are the positives. 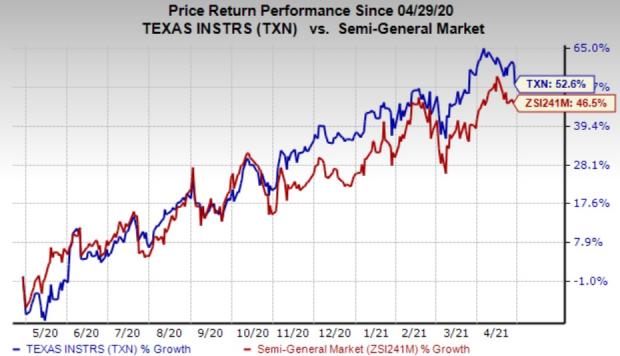 The continued rebound in the automotive space led to 25% growth in revenues of the company from this end-market on a year-over-year basis.

Further, revenues in the industrial market grew 30% from the year-ago quarter, owing to solid momentum across most sectors.

Additionally, strong traction of the company across major sectors led to year-over-year growth of 50% in the company’s revenues from the personal electronics market in the reported quarter.

Furthermore, enterprise systems’ revenues were down 10% on a year-over-year basis.

Analog: The company generated $3.3 billion from the segment (76.5% of total revenues), which increased 33% from the year-ago quarter.

Embedded Processing: The segment generated $767 million in revenues (17.9% of total revenues), up 17% year over year.

Other: Revenues in the segment were $242 million (5.6% of total revenues). The figure was up 12% from the prior-year quarter.

As a percentage of revenues, selling, general and administrative expenses contracted 260 bps year over year to $425 million in the reported quarter.

Further, research and development expenses of $386 million contracted 240 bps from the year-ago quarter as a percentage of revenues.

Operating margin was 45.2%, which expanded 780 bps from the prior-year quarter.

At the end of the reported quarter, the company had long-term debt of $6.25 billion, up from $6.24 billion in the prior quarter.

Current debt was nil compared with $550 million in the previous quarter.

The company generated $1.9 billion of cash from operations, down from $2.1 billion in the previous quarter.

Additionally, Texas Instruments paid out dividends worth $940 million in the reported quarter. Further, the company repurchased shares worth $100 million.

For second-quarter 2021, Texas Instruments expects revenues between $4.13 billion and $4.47 billion. The Zacks Consensus Estimate for revenues is pegged at $4.15 billion.