The U.S. telecom stocks witnessed a relatively flat curve on an average over the past five trading days with the economic payoff from President Biden’s ambitious infrastructure investment plan still remaining unclear. This, in turn, appeared to rob off the sheen of better-than-expected performance from hitherto reported companies, negating the gains witnessed at the first half of the past week. In addition, it apparently stole the limelight from the fact that the FCC approved a satellite deployment plan by a private entity to offer high-speed Internet services to the masses.

Although the FCC has formed a task force to develop accurate maps of broadband coverage across the country to facilitate a government initiative to significantly expand Internet access to the Americans, experts opine that it is unlikely to come up with a complete project report until next year. This is expected to dilute the immediate thrust to step up broadband connectivity as part of the infrastructure investment plan. Calls for openness to embrace a technologically inclusive approach for universal broadband availability and affordability also gained steam.

Meanwhile, the FCC gave approval to private space firm SpaceX to deploy some of its Starlink satellites in low earth orbit in a concerted effort to provide increased broadband access to underserved Americans. SpaceX would have to fly 2,824 satellites at an altitude below 570 km to prevent interference with other satellites. Notably, satellite technology is extremely costly to deploy, but it often serves as an effective high-speed Internet services provider to places where fiber optic cables and cell towers do not reach. It also serves as critical communication facilities during natural calamities. All-around strength and healthy momentum from companies that have reported quarterly results so far with favorable commentary about the forthcoming quarters were other positives.

Excluding non-recurring items, quarterly non-GAAP net income was $98.5 million or 30 cents per share (above the mid-point of the company’s guidance) compared with $77.2 million or 23 cents per share in the year-ago quarter. The bottom line beat the Zacks Consensus Estimate by 5 cents. Quarterly total revenues aggregated $1,074.4 million (above the mid-point of the management-provided guidance) compared with $998 million reported in the year-ago quarter. The year-over-year growth, despite coronavirus-led adversities leading to supply constraints and extended lead times, was largely driven by healthy momentum across all verticals. The top line beat the consensus mark of $1,058 million.

Non-GAAP net income came in at $27.8 million or 29 cents per share compared with $3.2 million or 3 cents per share in the prior-year quarter. The bottom line beat the Zacks Consensus Estimate by 4 cents. Quarterly revenues grew 23.2% year over year to $201 million, which came above the midpoint of the company’s guidance. The growth was driven by solid MEMS (micro-electro-mechanical systems) microphone demand across multiple end markets and improved trends in the Hearing Health business. The top line surpassed the consensus estimate of $200 million.

Quarterly net income per ADR came in at 3 cents against net loss per ADR of 45 cents in the prior-year quarter. The bottom line missed the Zacks Consensus Estimate by 30 cents. Despite strong demand for broadband services, quarterly total revenues of MxP248,186 million ($12,197.1 million) were almost flat year over year, accompanied with lower service and equipment revenues. The top line lagged the consensus estimate of $12,445 million.

Non-GAAP net income came in at $2,185 million or $1.90 per share compared with $1,015 million or 88 cents per share in the year-ago quarter. This reflects higher licensing revenues and solid performance in the chipset business. The bottom line beat the Zacks Consensus Estimate by 23 cents, delivering a surprise of 13.8%. Non-GAAP revenues were $7,925 million compared with $5,206 million in the year-ago quarter. The top line surpassed the consensus estimate of $7,626 million. 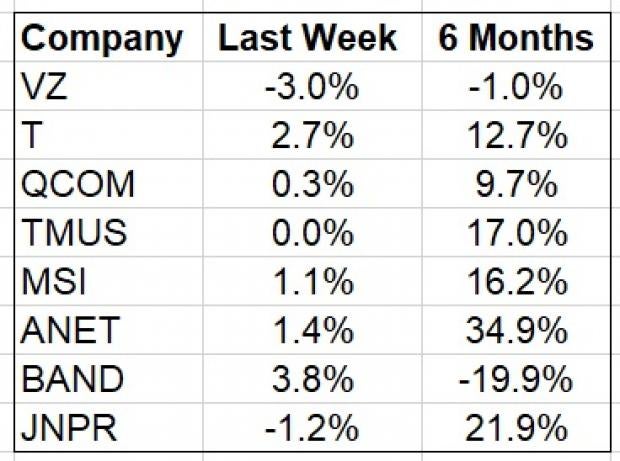 In the past five trading days, Bandwidth has been the best performer with its stock gaining 3.8%, while Verizon declined the most with its stock falling 3%.

Over the past six months, Arista has been the best performer with its stock appreciating 34.9%, while Bandwidth declined the most with its stock falling 19.9%.

Over the past six months, the Zacks Telecommunications Services industry has jumped 21% on average, while the S&P 500 has gained 29.1%. 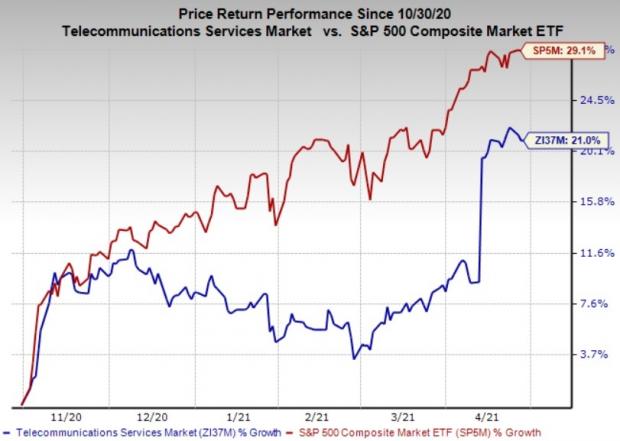