The three major hindrances to mass electric vehicle (EV) adoption are the cost of the vehicles, access to charging and the time to charge. Thus, with the launch of Ultium Charge 360, General Motors is focusing on providing EV owners with more confidence and convenience when it comes to EV charging. Ultium Charge 360 improves the at-home charging experience and the public charging experience, thus making transition to an EV seamless and effortless.

Additionally, the Detroit-based auto giant has inked agreements with seven network partners — Blink Charging, ChargePoint, EV Connect, EVgo, FLO, Greenlots and SemaConnect — which combine for more than 60,000 publicly-available charging plugs throughout the United States and Canada. The will enable the company’s EV customers to procure real-time status information from all of the chargers on their GM vehicle mobile apps, making it easier for them to find a station along their route.

Reportedly, the first General Motors’ and EVgo sites are now operational in Washington, California and Florida, nine months after a promise to add more than 2,700 fast chargers by the end of 2025 was first announced by the auto biggie.

GM on a Spree to Revolutionize the EV Space

Amid the heightening climate-change concerns, investors are intrigued by automakers that provide green transportation solutions. A shift toward electric future has made it necessary for industry players to reorient their business model and accelerate the EV game. Amid the transforming auto industry, companies like Tesla (TSLA - Free Report) , Ford Motor Company (F - Free Report) and NIO Inc. (NIO - Free Report) are taking considerable strides to provide transportation with zero emissions.

General Motors is also committed to its goal of providing completely carbon-free transportation in the upcoming years and is boosting its electrification efforts to attain this target. The company has always been at the forefront of the automotive revolution and is focused on its vision of an all-electric future. The automaker has committed more than $27 billion to EV and autonomous vehicle development, with the goal of rolling out 30 fresh EV models by the end of 2025.

Recently, the automaker revealed the 2023 Cadillac LYRIQ, the brand’s electric luxury SUV. Customers will be able to place order reservations for the model from September, with initial availability expected in the first half of 2022.

The SUV is anticipated to go into production in the first quarter of 2022, with a base price of $59,990. It will be produced at the automaker’s Spring Hill, TN assembly facility, which is receiving a $2-billion investment to support EV manufacturing.

Earlier this year, the automaker also rolled out a new marketing campaign, "Everybody In,” to underscore its commitment and renewed efforts to accelerate the mass adoption of EVs. As part of this campaign, the auto giant also unveiled a new GM logo in a bid to amplify the automaker’s renewed commitment to the production and sale of electric vehicles.

The company has adopted an “all-in” electrification strategy, whereby it will build a competitive advantage in batteries, software, vehicle integration, manufacturing and customer experience in order to make EVs the key to driving the company’s profitability.

Shares of General Motors have appreciated 40.6%, year to date, compared with the industry’s growth of 5.7%. 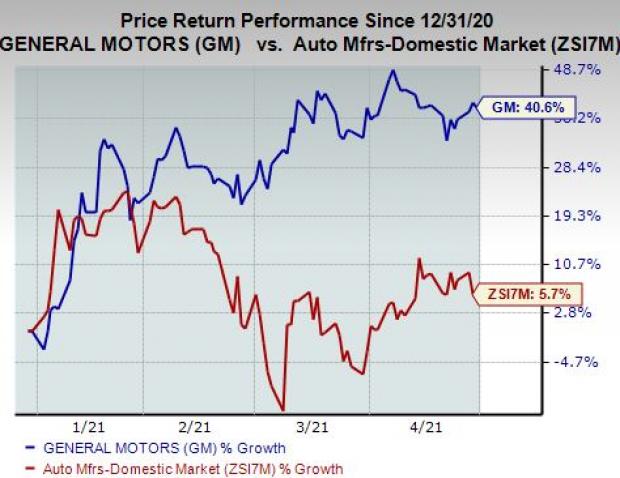