Molson Coors Beverage Company (TAP - Free Report) has reported first-quarter 2021 results, wherein earnings and sales beat the Zacks Consensus Estimate. However, the top and bottom lines declined year over year. The decline can be attributed to the impacts of the system outage, owing to the cybersecurity incident that occurred on Mar 11, an 11-day long closure of the Fort Worth, TX-based brewery due to winter storms in February, and government restrictions resulting in the closure of the entire on-trade channel in the U.K.

Nonetheless, the company is progressing well with its revitalization plan, which is aimed at driving long-term revenue and EBITDA growth. It has been expanding its above-premium portfolio. Further, it is on track with its hard seltzer ambition, with the launch of Topo Chico Hard Seltzer. Also, its Vizzy and Coors Seltzer are in the top-five hard seltzers amid Canada’s retailers. Moreover, the company is poised to launch the three-fold hard seltzer brand in the U.K. and the Wai brand in Central and Eastern Europe. The Blue Moon LightSky has attained the top-volume share gainer rank in the U.S. craft segment.

Backed by the better-than-expected results, shares of the company rose 1.8% in the pre-market session. Moreover, the Zacks Rank #4 (Sell) company’s shares have gained 4.8% in the past three months compared with the industry’s rise of 8.9%. 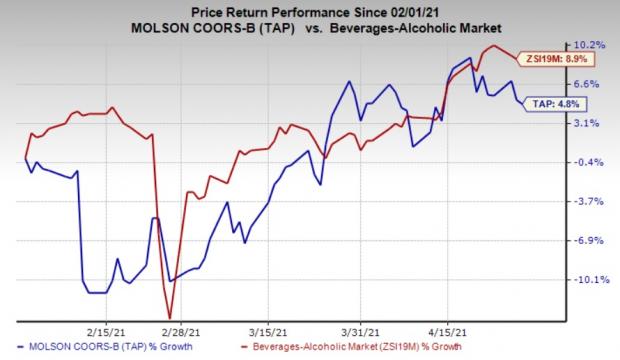 The company’s adjusted earnings of 1 cent per share declined 34 cents year over year but beat the Zacks Consensus Estimate of a loss of 12 cents. A decline in sales and lower financial volume coupled with higher cost of goods sold per hectoliter in constant currency hurt the bottom line.

Net sales declined 9.7% to $1,898.4 million but surpassed the Zacks Consensus Estimate of $1,861 million. The year-over-year decline was mainly caused by the decrease in financial volume, including a fall of 9.4% in North America and 22% in Europe. Additionally, sales were hurt by adverse channel and geographic mix, owing to the impact of restrictions in the on-premise channel, particularly in the U.K. and Canada. This was partly offset by increased net pricing in North America and Europe as well as favorable brand mix in the United States. Also, the absence of the last year’s estimated keg returns and reimbursements due to the pandemic-led on-premise closures aided the top line.

Molson Coors’ worldwide brand volume declined 9.1% to 16.2 million hectoliters and financial volume declined 12% to 16.2 million hectoliters. Financial volume was impacted by soft brand volumes due to restrictions in on-premise as well as the absence of the March 2020 pantry loading. Additionally, unfavorable shipment timing in the United States due to the cybersecurity incident in March 2021, headwinds related to winter storms in Texas hurting the Fort Worth Brewery and lower contract volumes hurt financial volume. This was partly offset by the downtime of the Milwaukee tragedy last year.

North America: Net sales in the segment dropped 5.5% to $1,692 million on a reported basis and 6.3% at cc, thanks to declines in financial and brand volume. North America brand volumes declined 6.7%, while financial volume fell 9.4%. The downside in financial volume was due to lower brand volume and unfavorable shipping timing in the United States, owing to the aforementioned cybersecurity incident and the closure of the Texas brewery due to winter storm. This was partly negated by the absence of brewery downtime related to the Milwaukee tragedy in the prior year. North America brand volume was impacted by greater on-premise restrictions, one less trading day compared with the prior year, and the absence of March 2020 pantry loading.

In the United States, brand volumes fell 7.3%, while domestic shipment was down 9.5%. In Canada, brand volume declined 10.8% but improved 10.8% in Latin America in the reported quarter. Net sales per hectoliter, on a brand volume basis, rose 2.4% at cc on a favorable brand mix in the United States and higher net pricing in the United States and Canada. Further, the absence of last year’s keg sales returns and reimbursements related to the on-premise impacts due to the pandemic aided net sales per hectoliter. This was offset by adverse brand and channel mix in Canada due to the shift of volume from on-premise to off-premise and negative geographic mix, owing to growing license volume in Latin America. Underlying EBITDA fell 12.7% on a reported basis to $304.4 million and 13.3% at cc.

Europe: The segment’s net sales on a reported basis declined 34.9% to $206.9 million and 39.5% at cc. The downtick was due to lower volume and a drop in net sales per hectoliter, thanks to the elevated impacts of the pandemic. Net sales per hectoliter (brand volume basis) in the segment were down 10.4%, resulting from an unfavorable channel, brand and geographic mix.

The adverse geographic mix is mainly related to its high-margin U.K. business, which has greater exposure to the on-premise channel, which remained closed throughout the first quarter. This was partly offset by the absence of last year’s keg sales returns and reimbursements related to the on-premise impacts due to the pandemic. The segment’s financial volume fell 22% and brand volumes were down 17%, hurt by a plunge in brand volumes in the U.K. due to the full closure of the on-premise channel. The segment reported an underlying EBITDA loss of $38 million versus a loss of $4.1 million in the prior-year quarter.

Molson Coors ended the first quarter with cash and cash equivalents of $532.7 million. At the end of first-quarter 2021, the company had total debt of $8.2 billion, resulting in net debt of $7.7 billion.

It used $190.9 million of cash flow in operating activities in the first quarter, resulting in negative underlying free cash flow of $270.8 million.

Despite the current uncertainties, management retained its view for 2021. Management expects that the company’s board will reinstate a dividend in the second half of 2021. The company is progressing with its revitalization plan, which targets long-term revenue and underlying EBITDA expansion.

Net sales are projected to grow in the mid-single digits at constant currency. Underlying EBITDA is likely to remain almost flat year over year at cc. Management estimates achieving a net debt to underlying EBITDA ratio of 3.25X by the end of 2021 and below 3.0X by 2022 end.

Further, underlying depreciation and amortization are projected at $800 million, while the underlying effective tax rate is likely to be 20-23%. Consolidated net interest expenses are anticipated to be $270 million, plus or minus 5%.