BioMarin Pharmaceutical Inc.’s (BMRN - Free Report) adjusted earnings of 56 cents per share beat the Zacks Consensus Estimate of 32 cents. Earnings were, however, down 11.1% year over year due to lower revenues and gross profit.

Total revenues were $486 million in the reported quarter, down 3% from the year-ago period. Sales, however, beat the Zacks Consensus Estimate of $445 million.

In the quarter, the company continued to experience the adverse impact of COVID-19. The ongoing pandemic caused disruption in new patient starts for some of its products in the United States.

Shares of BioMarin were down 2.4% in after-hours trading on Thursday following announcement of the earnings results. In fact, the stock has plunged 8.6% so far this year compared with the industry’s decrease of 0.6%. 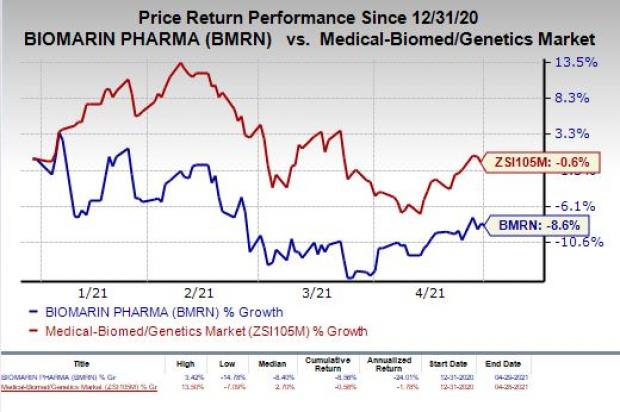 In the phenylketonuria (“PKU”) franchise, Kuvan revenues declined 42% to $70.8 million due to generic competition as the drug lost U.S. market exclusivity in October 2020. Palynziq injection sales grossed $54 million in the quarter, up 56% year over year, driven by growing number of U.S. patients who have now achieved maintenance dosing. Total sales of PKU franchise declined 20% year over year to $124.8 million.

Naglazyme sales declined 6% to $107.3 million. Vimizim contributed $158.4 million to total revenues, up 15% year over year. Sales of both Naglazyme and Vimizim benefited from the favorable timing of orders from the Middle East and Latin America.  Naglazyme and Vimzim revenues vary on a quarterly basis, primarily due to the timing of central government orders from some countries.

Brineura generated sales of $27.3 million in the quarter, up 14% year over year. On the first-quarter conference call, management stated that Naglazyme, Vimizim and Brineura have maintained strong patient compliance despite the effects of COVID-19 worldwide.

Genzyme is BioMarin's sole customer for Aldurazyme and is responsible for marketing and selling Aldurazyme to third parties.

BioMarin maintained the financial guidance it provided early this year. The company expects total revenues in the range of $1.75-$1.85 billion. The Zacks Consensus Estimate stands at $1.81 billion.

The company expects adjusted net income to be in the range of $170-$220 million.

We remind investors, that in August last year, the FDA issued a complete response letter (“CRL”) to BioMarin’s biologics license application (“BLA”) for valoctocogene roxaparvovec. The BLA application was based on interim data from an ongoing phase III study and the updated three-year results from a long-term phase I/II study.

However, the FDA was not satisfied with the data and asked for two-year follow-up safety and efficacy data on annualized bleed rates from the ongoing phase III study to provide additional evidence of a durable effect.  One year of follow-up of all patients in the study was announced in January.

Another important candidate in its pipeline is vosoritide, which has been developed to treat achondroplasia, the most common form of dwarfism. Regulatory applications for vosoritide are under review in the EU and the United States. BioMarin submitted two-year results from the phase III extension study on vosoritide to the FDA, which resulted in the action date getting extended. A decision from the FDA is now expected on Nov 20, 2021 compared with the earlier date of Aug 20, 2021. This delay in the PDUFA date for vosoritide might have also resulted in the stock going down in after-hours trading on Thursday.