However, the company’s first-quarter results reflected sequential gains across most of its segments compared with the fourth quarter of 2020.

Driven by the increasing relevance of its logistics and distribution business, the company plans to report this as a separate segment, going forward. Consequently, it will now report core operations under three segments — FEMSA Comercio’s retail divisions: Proximity, Health and Fuel; Logistics and Distribution; and Coca-Cola FEMSA S.A.B. de C.V. (KOF - Free Report) .

Net consolidated income for the largest franchise bottler for The Coca-Cola Company (KO - Free Report) was Ps. 6,260 million (US$308.1 million) compared with Ps. 9,112 million (US$458.8 million) reported in the year-ago quarter, reflecting a decline of 31.3%. The decline can primarily be attributed to an adverse comparison base in the prior-year quarter due to foreign currency gains linked to FEMSA’s U.S. dollar-denominated cash position, which benefited from the depreciation of the Mexican Peso. This was partly offset by lower interest expenses and gains from increased participation in Heineken’s results.

Total revenues were $6,120.6 million (Ps. 124,474 million), which improved 1.8% year over year in the local currency. Meanwhile, the Zacks Consensus Estimate is pegged at $6,132 million. On an organic basis, total revenues declined 3%, owing to the impacts of the pandemic across most of its segments.

Shares of the Zacks Rank #2 (Buy) company has gained 17.1% in the past three months compared with the industry’s growth of 5%. 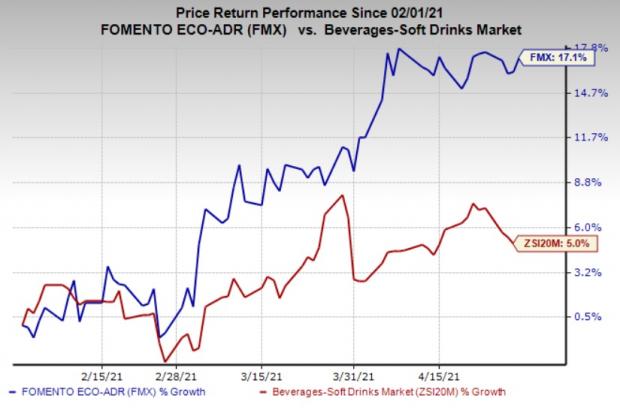 FEMSA Comercio — Proximity Division: Total revenues for the segment declined 4.8% year over year to Ps. 43,418 million (US$2,136.7 million). The decline can primarily be attributed to a 6.5% fall in same-store sales on an 18.3% decline in store traffic due to reduced customer mobility and continued restrictions. However, a 14.4% increase in average ticket, driven by the shift in sales mix toward home consumption categories and SKUs due to the pandemic, partly offset the decline.

In the reported quarter, the company’s OXXO store base increased by 140 stores. Consequently, FEMSA Comercio’s Proximity division had 19,706 OXXO stores as of Mar 31, 2021.

Operating income declined 21.1% year over year, while operating margin contracted 110 bps to 5.6%, owing to operating deleverage. Higher operating expenses mainly resulted from the ongoing initiatives to strengthen the compensation structure for store personnel and lower revenues than usual from its fixed cost base.

FEMSA Comercio — Health Division: The segment reported total revenues of Ps. 17,750 million (US$873.5 million), up 16% year over year. Revenues benefited from positive trends in Mexico and South America operations along with favorable currency translations. This was partly negated by strict mobility restrictions that continued to affect operations in Ecuador. Further, same-store sales for drugstores increased 15.5%. On a currency-neutral basis, total revenues increased 4.2%, while same-store sales increased 7.8%. The segment had 3,405 points of sales across all regions as of Mar 31, 2021.

FEMSA Comercio — Fuel Division: Total revenues declined 21.4% to Ps. 8,535 million (US$420 million). Same-station sales declined 22.4%, driven by a 24.8% fall in the average volume due to the pandemic-led reduced mobility, offset by a 3.2% rise in the average price per liter. The company had 561 OXXO GAS service stations as of Mar 31, reflecting the addition of 11 stations in the last 12 months. Operating income declined 53%, while operating margin contracted 170 bps to 2.4%.

Logistics and Distribution: Total revenues for the segment were Ps. 10,809 million (US$531.9 million). Revenues reflected positive demand trends across its operations in Brazil as well as recovery trends in the United States. However, negative currency translations affected results. The segment’s operating income was Ps. 364 million (US$17.9 million), with 3.4% of operating margin.

Coca-Cola FEMSA: Total revenues for the segment declined 1.5% year over year to Ps. 44,690 million (US$2,199.3 million). On a comparable basis, revenues improved 5.4%. Coca-Cola FEMSA’s operating income rose 3%, while comparable operating income was up 10.6%. The segment’s operating margin expanded 60 bps to 13.2% on freight and marketing expense efficiencies across its operations, partly negated by lower gross profit.

Want a Better-Ranked Stock? Check This

Sanderson Farms, Inc. has an expected long-term earnings growth rate of 43.6%. It sports a Zacks Rank #1 (Strong Buy) at present. You can see the complete list of today’s Zacks #1 Rank stocks here.