Toyota announced its decision to invest $803 million to revamp its factory in Indiana to manufacture the electrified version of two new sport-utility vehicles, one of which will be sold by its luxury Lexus brand. (Toyota to Invest in Indiana, Revs Up Electrification Goals)

Tesla reported first-quarter 2021 earnings of 93 cents, which surpassed the Zacks Consensus Estimate of 79 cents per share. The bottom line also compared favorably with the year-ago earnings of 25 cents a share. Total revenues came in at $10,389 million, surpassing the consensus mark of $9,920 million and rising 74% year over year. The EV king generated free cash flow of $293 million for the quarter. While Tesla has not provided any clear delivery target for 2021, it just released a statement mentioning that it anticipates achieving 50% average annual growth in vehicle deliveries over a multi-year horizon.

Ford posted first-quarter 2021 adjusted earnings of 89 cents per share, breezing past the Zacks Consensus Estimate of 16 cents and turning around from the year-ago loss of 23 cents. The company generated automotive revenues of $33.5 billion, which outpaced the Zacks Consensus Estimate of $31.1 billion. Amid the acute chip shortage, Ford lowered its guidance and expects a $2.5 billion hit to earnings. Consequently, it now anticipates full-year 2021 adjusted EBIT in the band of $5.5-$6.5 billion. Guidance for adjusted FCF has also been cut and is currently envisioned in the range of $500-$1.5 billion versus the prior forecast of $3.5-4.5 billion.

O’Reilly reported first-quarter 2021 earnings per share of $7.06, surpassing the Zacks Consensus Estimate of $5.36, thanks to remarkable comparable store sales growth. The bottom line also increased 77.8% from $3.97 a share recorded in the prior-year quarter. For 2021, it now projects total revenues within $11.8-$12.1 billion, higher than the prior guided range of $11.5-$11.8 billion. Earnings per share are envisioned within $24.75-$24.95, comparing favorably with the previous view of $22.7-$22.9. Furthermore, the company now expects comparable store sales to rise 1-3% versus a decline of upto 2% projected earlier. 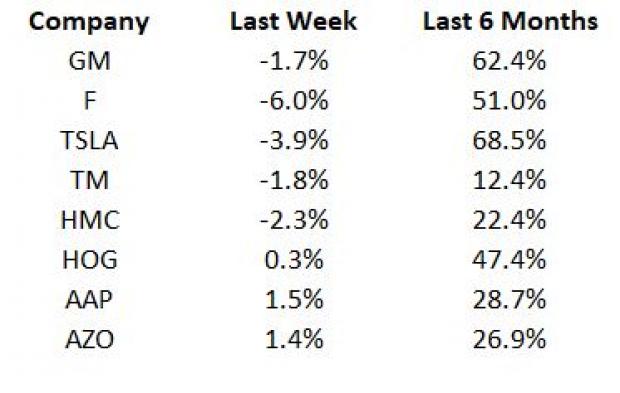 Car enthusiasts will be keeping a close watch on April 2021 U.S. car sales, which are set to be released soon. Investors in the auto sector would be closely tracking the sales reports of auto biggies including General Motors, Ford, Volkswagen, Honda and Toyota. Meanwhile, they are also awaiting the quarterly releases of General Motors, Cummins, CNH Industrial, Adient, Lear Corp. that are scheduled to report results during the week.

Sail Through the Choppy Market With These 5 Low-Beta Stocks