Morgan Stanley (MS - Free Report) is anticipated to gain almost full control of two of its joint ventures (JVs) in China after its China partner puts the stakes for sale. According to people with knowledge of the matter, China Fortune Securities Co. is seeking buyers for its stakes in two JVs with the U.S. bank.

Given that China’s $53-trillion financial market is now open to foreign firms, following the removal of restrictions on ownership, many global firms are rushing to capitalize on the opportunity.

More than 40 foreign firms have either set up JVs in China or have applied for greater control.

The biggest U.S. bank by assets, JPMorgan (JPM - Free Report) , has decided to get full ownership of all of its mainland China operations by the end of this year. Also, Goldman Sachs (GS - Free Report) plans to attain full control of its securities operations in China.

UBS Group AG (UBS - Free Report) , which became the first foreign bank in 2018 to get a nod for majority control of a JV in China, is mulling to increase its stake in the China securities JV by 16%, thus, increasing its holding to 67%.

So far this year, shares of Morgan Stanley have gained 20.3% compared with 27.9% growth recorded by the industry. 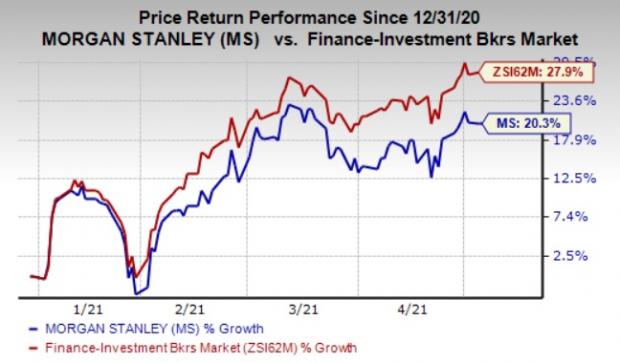