Operating revenues came in at R$30 billion ($5.5 billion) in the reported quarter, up 2.8% on a year-over-year basis.

Non-interest expenses came in at R$12.4 billion ($2.3 billion), flaring up 3.2% from prior-year quarter. Notably, expenses for provision for loan and lease losses fell more than double on a year-over-year basis to R$4.1 billion ($0.75 billion).

In the first quarter, the efficiency ratio was 44.6%, expanding 20 basis points (bps) from the year-earlier quarter. An increase in this ratio indicates decreased profitability.

The non-performing loan ratio (loan transactions more than 90 days overdue) came in at 2.3% during the January-March quarter, down from the prior-year quarter’s 3.1%. Itau Unibanco’s credit portfolio, including financial guarantees provided and corporate securities, reached R$906.4 billion ($158.4 billion) as of Mar 31, 2021, up 14.9% year over year.

Annualized recurring return on average equity rose to 18.5% in the first quarter from the 12.8% recorded in the year-earlier quarter.

Results of Itau Unibanco highlight an impressive performance during the March-end quarter on lower provisions and higher revenues. Moreover, the company’s future prospects look encouraging as it is focused on building strategies to expand inorganically.

In addition to these, the merger with CorpBanca has fortified the bank’s footprint in Latin America, while acquiring Citibank’s operations has fueled the company’s growth. However, inflated expenses are a concern. 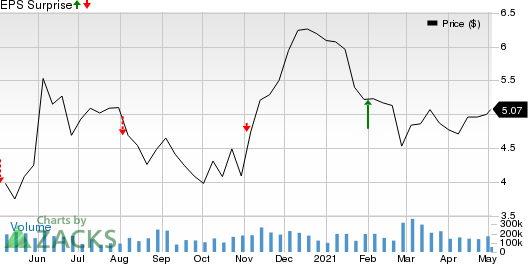 What's in Store for Allstate (ALL) This Earnings Season?