Sales rose around 22% year over year to $2,357 million. The figure also surpassed the Zacks Consensus Estimate of $1,998.2 million.

The company benefited from increased sales prices and margins for most of its key products including polyethylene and polyvinyl chloride (PVC) resin, and strong demand in downstream building products business in the quarter. These were partly offset by lost production and sales volumes, higher maintenance expense and increased ethane and ethylene feedstock and natural gas fuel costs associated with the winter storm.

Sales in the Vinyls segment went up around 21% year over year to $1,820 million in the reported quarter. Operating income in the segment was $200 million, up nearly three-fold year over year.  The results were driven by higher sales prices and margins for PVC resin, and increased earnings in the downstream building products business.

The Olefins segment generated sales of $537 million, up roughly 26% year over year. Operating income in the segment was $180 million, up nearly three-fold year over year. The upside was mainly due to higher sales prices and margins for all products, driven by strong global demand.

Cash flow from operations was $265 million for the quarter, a roughly four-fold year-over-year increase.

Moving ahead, Westlake Chemical sees continued strong global demand in polyethylene, PVC and downstream building products on strong markets for the downstream uses of its products including residential construction, packaging and healthcare. The company remains focused on operating its facilities safely and efficiently. It is also making disciplined investments, launching new products, lowering costs and leveraging its current products and footprint globally.

Shares of Westlake Chemical have rallied 129% in a year compared with the industry’s 120.8% rise. 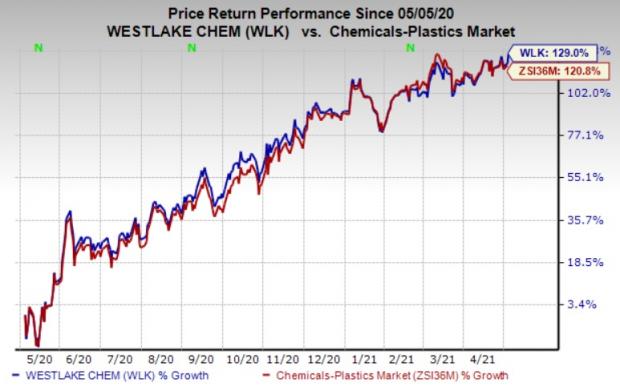 Nucor has a projected earnings growth rate of 228.4% for the current year. The company’s shares have rallied around 120% in a year. It currently sports a Zacks Rank #1 (Strong Buy). You can see the complete list of today’s Zacks #1 Rank stocks here.

Dow has a projected earnings growth rate of 261.5% for the current year. The company’s shares have shot up around 98% in a year. It currently sports a Zacks Rank #1.

Impala Platinum has an expected earnings growth rate of 197.6% for the current fiscal. The company’s shares have surged around 229% in the past year. It currently carries a Zacks Rank #1.

Amyris (AMRS) to Report Q1 Earnings: What's in the Offing?