The chairman and CEO of BancorpSouth, Dan Rollins, stated, “We're pleased to announce the completion of these two mergers, which represent positive steps forward in our growth strategy. Both National United and FNB Bank are excellent complements to our existing company. By combining with them, we're able to expand our presence in key markets and align with respected bankers who share our commitment to service.”

Notably, as of Dec 31, 2021, National United and FNS Bancshares collectively reported assets worth $1.5 billion, loans of $930 million and deposits of $1.4 billion.

BancorpSouth’s area chairman and former president and CEO of National United, Eugene Worthington, said, “We're pleased to join BancorpSouth's team and have the ability to provide expanded banking services to our customers in Central Texas and additional growth opportunities for our employees. This has been a positive experience for everyone involved and will provide significant long-term value for our stakeholders.”

Similarly, Steve Rownd, the president of BancorpSouth Tennessee Valley division and former CEO of FNS Bancshares, said, “The completion of this merger is a great accomplishment for our organization. We're pleased to be partnering with a strong, growing company like BancorpSouth and feel confident that this combination will be beneficial to our employees, customers and communities across Alabama, Georgia and Tennessee.”

Supported by a solid liquidity position, BancorpSouth has been continuously making strategic investments through which it will further expand customer base and geographical presence.

Also, in October 2020, BancorpSouth acquired Alexander & Sanders Insurance Agency, Inc., whereas, in January, it acquired Texas First Bancshares. The buyouts have enabled BancorpSouth to expand its insurance-related operations in Louisiana and strengthen its footprint in Texas.

So far this year, shares of BancorpSouth have gained 10.4% compared with the industry's growth of 33.5%. 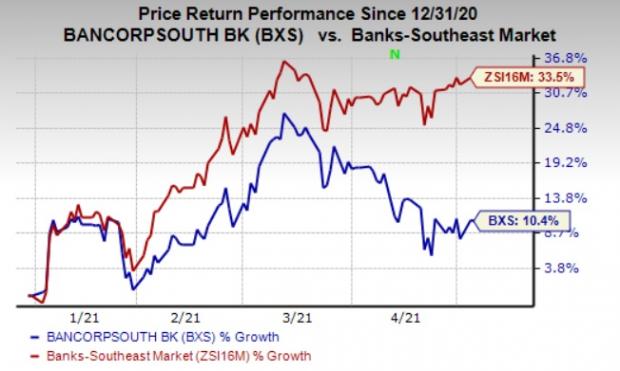 Similar to BancorpSouth, several other financial firms have been undertaking efforts to expand operations. M&T Bank Corporation (MTB - Free Report) and People’s United Financial Inc. (PBCT - Free Report) announced a merger deal earlier in 2021. The all-stock deal worth $7.6 billion is expected to close in the fourth quarter of 2021, subject to necessary approvals.