The U.S. telecom stocks witnessed an uptrend over the past five trading days on the back of concrete steps taken by the government to allay industry fears and repose investors’ confidence. In order to ensure digital inclusion for all Americans and bridge the digital divide between urban and rural areas, President Biden put his most trusted lieutenant – Vice President Kamala Harris – in charge of overseeing the initiative. This apparently provided a much-needed boost to the central plank of ‘broadband for all’ thrust within the multi-billion infrastructure investment plan of the President. Additionally, the U.S. Trade Representative Katherine Tai pledged to abide by the Phase I trade agreement inked by the earlier government with China and proposed to develop a mutually agreeable bilateral trade relationship at a time when the industry is facing various supply-chain bottlenecks and chip shortages.

In order to meet the acute shortfall of chips for auto manufacturers, the U.S. Commerce Department is further pressing Taiwan Semiconductor Manufacturing Co Ltd and other Taiwan-based firms to increase production. The companies are reportedly working in unison to address the issue and improve capacity to meet the demand-supply gap. In the meantime, the government is unlikely to force companies to reallocate semiconductor chips from other sectors as it would hurt consumer electronics like laptops, smartphones and gadgets and medical devices like pacemakers, further aggravating the supply-chain mechanism. On the other hand, startup chip manufacturers that focus on technology innovation and not on legacy chips used by auto manufacturers are increasingly gaining traction. These firms are attracting investments from venture capitalists as demand for processors that run ML algorithms requiring huge troves of data for the booming AI business escalates.

Meanwhile, private space firm SpaceX has successfully launched its Starlink satellite after the FCC gave its approval last week for deployment in low earth orbit in a concerted effort to provide increased broadband access to underserved Americans. Notably, SpaceX would have to fly 2,824 satellites at an altitude below 570 km to prevent interference with other satellites. All-around strength and healthy momentum from companies that have reported quarterly results so far with favorable commentary about the forthcoming quarters were other positives.

Regarding company-specific news, earnings and divestment primarily took the center stage over the past five trading days.

Adjusted EPS came in at 92 cents, which beat the Zacks Consensus Estimate by 37 cents, delivering a surprise of 67.3%. Quarterly total revenues soared 77.8% year over year to $19,759 million, driven by the Sprint merger and customer growth. Also, the top line surpassed the consensus estimate of $18,845 million.

Excluding non-recurring items, non-GAAP net income came in at $198.8 million or $2.50 per share compared with $161.7 million or $2.02 per share in the year-ago quarter. The bottom line beat the Zacks Consensus Estimate by 12 cents. Quarterly total revenues were up 27.6% year over year to $667.6 million and was well ahead of the company’s guidance of $630-$650 million. The rise was primarily led by solid customer additions and growth in the enterprise vertical, partially offset by shipment constraints resulting from the COVID-19 operating environment and supply-chain disruptions. The top line surpassed the consensus estimate of $640 million.

3.     Verizon Communications Inc. (VZ - Free Report) has inked a deal with Apollo Global Management, Inc. to sell its media business — Verizon Media — for $5 billion. The transaction, subject to fulfillment of certain conditions, is expected to be closed in the second half of 2021. Post completion, Verizon will retain 10% stake in the company.

The sale reaffirms Verizon’s focus on its core wireless business, where it is seeing solid demand for its services. The telecom giant’s disciplined network strategy for long-term sustainable growth, along with operational execution, is noteworthy.

4.    Nokia Corporation (NOK - Free Report) reported solid first-quarter 2021 results, wherein both the bottom line and the top line beat the respective Zacks Consensus Estimate. The company is on track to deliver on its three-phased plan to achieve sustainable, profitable growth and technology leadership.

Comparable profit came in at €375 million ($452 million) or €0.07 (8 cents) per share, up from €33 million or €0.01 per share in the prior-year quarter. The bottom line beat the Zacks Consensus Estimate by 7 cents. On a reported basis, quarterly net sales grew 3.3% year over year to €5,076 million ($6,118.1 million). The growth was primarily driven by the Network Infrastructure business group, which benefited from the increasing demand for next-generation connectivity. Also, the top line surpassed the consensus estimate of $5,867 million.

Non-GAAP net income came in at $42.3 million or 18 cents per share compared with $32 million or 14 cents per share in the prior-year quarter. The bottom line beat the Zacks Consensus Estimate by a penny. Recovering from the pandemic adversities, quarterly total net revenues increased 18.4% year over year to $303.4 million and exceeded the company’s guidance of $280-$300 million. The upsurge was primarily driven by continued strength in wireless and fiber, along with robust demand for anti-counterfeiting products. Also, the top line surpassed the consensus estimate of $291 million. 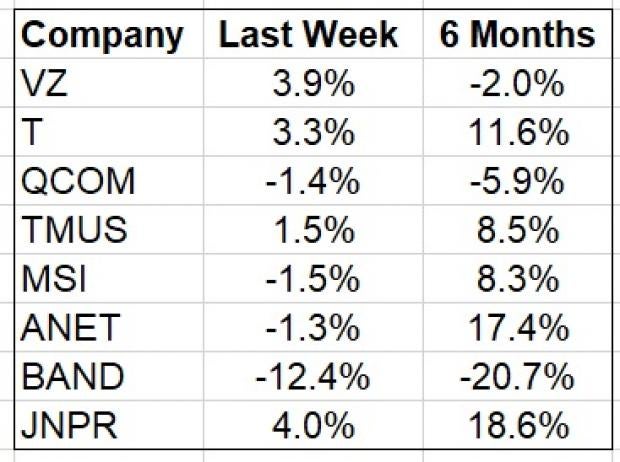 In the past five trading days, Juniper has been the best performer with its stock gaining 4%, while Bandwidth declined the most with its stock falling 12.4%.

Over the past six months, Juniper has been the best performer with its stock appreciating 18.6%, while Bandwidth declined the most with its stock falling 20.7%.

Over the past six months, the Zacks Telecommunications Services industry has jumped 14.8% on average, while the S&P 500 has gained 18.2%. 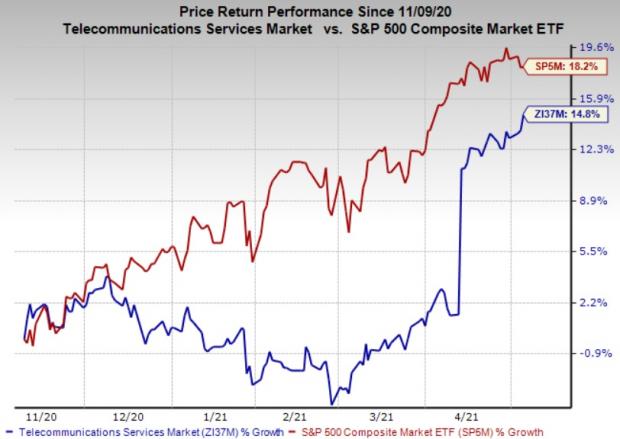