Adjusted earnings per share of 64 cents outpaced the Zacks Consensus Estimate by 4.9% and improved 12.3% year over year. The reported figure lies above the guidance of 61 cents.

Revenues of $275.1 million surpassed the consensus mark by 0.6% and climbed 12% year over year.The reported figure lies above the guided range of $270-$273 million.

Over the past year, shares of Envestnet have gained 5.7% compared with 19.2% rise of the industry it belongs to. 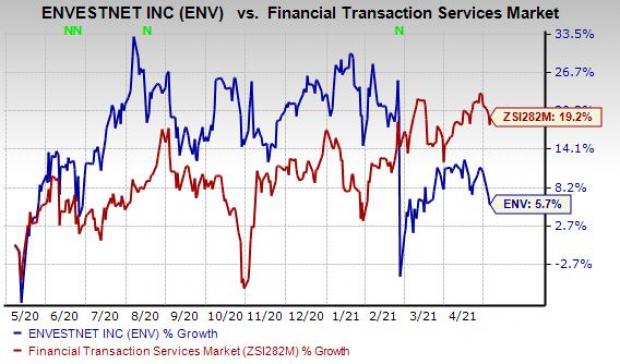 The company generated around $49.8 million of cash from operating activities. CapEx was $7.1 million.

For second-quarter 2021, Envestnet expects adjusted earnings to lie between 53-55 cents per share. The Zacks Consensus Estimate of 53 cents is in line with the lower end of the guidance.

Total revenues are estimated between $281 million and $284 million. The Zacks Consensus Estimate of $282.5 million lies within the guidance.

The company expects adjusted EBITDA in the band of $60-$62 million.

Total revenues are now anticipated between $1.138 billion and $1.148 billion compared with the prior guidance of $1.105-$1.120 billion. The Zacks Consensus Estimate of $1.14 billion lies within the updated guidance.

Equifax’s (EFX - Free Report) first-quarter 2021 adjusted earnings of $1.97 per share beat the Zacks Consensus Estimate by 29.6% and improved on a year-over-year basis. Revenues of $1.21 billion outpaced the consensus estimate by 7.9% and improved 26.6% year over year on a reported basis as well as on a local-currency basis.