Post Holdings, Inc. (POST - Free Report) reported second-quarter fiscal 2021 results, wherein earnings missed the Zacks Consensus Estimate, while sales beat the same. Meanwhile, both top and bottom lines declined on a year-over-year basis. Top lines across most segments were hurt by the absence of last year’s increased pantry-loading activities by consumers in response to the onset of the pandemic.

Further, volume declines due to the exit of some low-margin businesses and soft demand in the away-from-home foodservice channel were concerning. However, the Henningsen, Peter Pan and Almark acquisitions were accretive to the results.

Adjusted earnings of 29 cents per share declined significantly from earnings of 65 cents earned in the prior-year quarter. Moreover, the bottom line missed the Zacks Consensus Estimate of 55 cents.

The company registered sales of $1,483.3 million, down 0.7% from $1,494.2 million reported in the prior-year quarter. However, the figure exceeded the consensus mark of 1,412 million. Net sales growth in BellRing Brands and Refrigerated Retail was more than offset by the sluggishness in the Post Consumer Brands and Foodservice businesses. Nonetheless, the company’s results gained from a 310-bps benefit from the Henningsen, Peter Pan and Almark acquisitions.

Meanwhile, the company’s SG&A expenses increased 1.8% year over year to $249.4 million. SG&A expenses, as a percentage of sales, deleveraged 40 bps to 16.8% in the reported quarter.

Operating profit of $145.1 million declined 5.5% year over year as gains from gross profit growth were more than offset by SG&A expense deleverage.

Adjusted EBITDA declined 9.6% to $263.8 million from $291.7 million in the prior-year quarter, thanks to sluggishness across all segments, except for Post Consumer Brands. Adjusted EBITDA margin contracted 170 bps to 17.8% in the reported quarter.

Post Consumer Brands: Sales in the segment dipped 5.5% year over year to $479.9 million in the quarter under review. Gains from a favorable mix and a 340-bps benefit from the Peter Pan acquisitions were more than offset by a volume decline of 116%. The soft volumes were primarily a result of the absence of last year’s increased shopping due to pantry loading by consumers in response to the pandemic.

Additionally, declines caused by the exit of some low-margin private brands, and softness in value and private-label cereal products hurt the segment’s top line. Segmental profit was $91.8 million, down 0.6% from the prior-year quarter.

Weetabix: Segmental sales were flat year over year at $113.4 million. Gains from favorable foreign currency movements of roughly 710 bps aided sales. Volumes dropped 8.5% mainly on the lapping of the prior-year quarter’s pantry-loading activities due to the pandemic.

Also, a shift of sales to the first quarter of 2021 before the completion of Brexit as well as persistent softness in bar and drink products, owing to lower on-the-go consumption amid the pandemic, were headwinds. Segmental profit of $25.9 million fell 7.5% year over year.

Foodservice: Sales declined 2.4% to $369.2 million in the quarter under review, including benefits of 750 bps from the Henningsen and Almark acquisitions. Volume was down 11.1% due to reduced away-from-home demand in January and February, resulting from the impacts of the pandemic in various foodservice channels like full-service restaurants, quick-service restaurants, lodging, education and travel.

This was partly negated by volume growth in March, owing to favorable comparisons from the significantly lower away-from-home channel demand in March 2020. Segmental profit was $8.8 million, reflecting a 63% decline on a year-over-year basis.

Refrigerated Retail: Sales in the segment were $239.5 million, up 0.8% from the year-ago quarter. Improved average net pricing in side dish products and favorable mix aided the segment’s sales in the reported quarter. Volumes were down 1.7% year over year on the exit of some low-margin business and the absence of last year’s increased pantry-loading activity in response to the pandemic. Segmental profit declined 19.9% year over year to $24.2 million.

BellRing Brands: Sales of $282.1 million improved 9.6% year over year. Sales in the Premier Protein brand were up 8.2%, whereas volumes increased 7.4%. In the reported quarter, net sales reflected gains from the RTD shake distribution in both existing and new products, higher promotional activity and favorable product and customer mix.

This was partly mitigated by the absence of the increased customer trade inventory levels that occurred in the prior-year quarter as a result of the pandemic-led pantry loading. Sales in the Dymatize brand increased 28.8% year over year. However, segmental profit of $15.6 million dropped 55.6% in the quarter under review.

The company concluded the fiscal second quarter with cash and cash equivalents of $740.5 million, long-term debt of $6,981 million, and total shareholders’ equity of $2,901.2 million (excluding non-controlling interest). At the end of the reported quarter, the company had $730.7 million available under its revolving credit facility.

Cash provided by operating activities was $162.3 million for the year ended Mar 31, 2021. In the quarter under review, Post Holdings bought back 1.6 million shares for $155.4 million. As of Mar 31, 2021, it had the remaining authorization of $333.6 million under its current share repurchase plan.

Management predicts adjusted EBITDA of $590-$620 million for the second half of fiscal 2021, with modest favorability in the fiscal fourth quarter. Further, the company still anticipates capital expenditure of $225-$250 million for fiscal 2021, including $4 million attributable to BellRing.

Notably, shares of this Zacks Rank #5 (Strong Sell) company have gained 18.2% in the past three months compared with the industry’s growth of 8%. 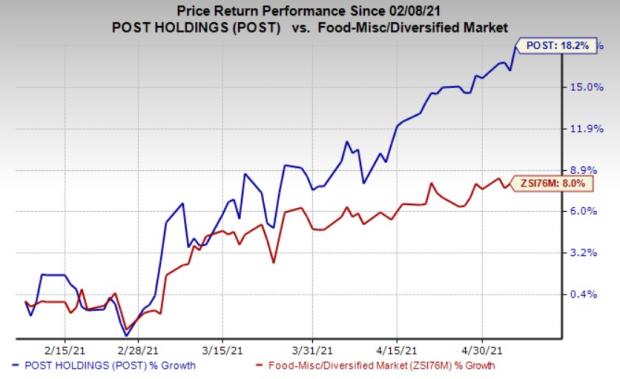